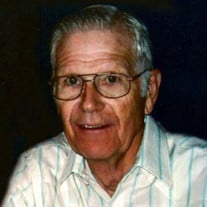 Funeral services for James Valdemar Olson of Wadena will be held at 10:30 a.m. on Monday, November 19, 2018, at the Zion Free Lutheran Church in Wadena with Pastor Curtis Emerson presiding. Friends may call at Schuller Family Funeral Home’s Johnson Schuller Chapel in Wadena on Sunday from 3:00 until 5:00 p.m. and at the church on Monday from 9:00 a.m. until the time of services. Jim passed away at the age of 85 years on Sunday, November 11, 2018 with his family at his side at the Lakewood Health System’s Care Center in Staples under the gentle care of Lakewood Hospice. Jim was born on February 13, 1933 at Landa, ND to Theodore and Borgny (Sem) Olson. He graduated from Bottineau High School in 1951. He served his country during the Korean War by entering the US Army and serving from 1953 until his honorable discharge in 1955. He attended two years at the Bottineau School of Forestry before completing his Bachelors Degree at the University of North Dakota, Grand Forks. On December 26, 1959, Jim married Marilyn Gubrud. He taught high school business education for thirty-five years at schools in Bagley, Plainview and Crosby. In addition to classwork, he coordinated work experiences for his students in the communities and was advisor for the Crosby yearbook, among other activities. After retiring in 1991, he moved to Nisswa. On April 30, 2003, Jim married Gail Rosalie Alberts at Milbank, SD. They made their home in Hawley, MN for a time before moving to Ulen, MN in 2004 and later moving to the Merickel Apts. in Wadena in 2011. While in high school, Jim worked as a soda jerk at Sigurdson’s Pharmacy and as a clerk at Ace Hardware in Bottineau where he became pretty handy. He enjoyed working on building and plumbing projects. He loved spending time outdoors hunting, fishing and watching birds. He was an active member of the American Legion in Wadena. Jim was preceded in death by his parents, Theodore and Borgney; son Kenneth James Olson on November 6, 2016; and sister Joy Marie Place in 1982. He is survived by his loving wife Gail; children Chad Theodore Olson of Fort Ripley, MN and Dawn (Dale) Bjerkness of Merrifield, MN; 5 grandchildren and 2 great-grandchildren; and sister Christine (Mac) Vossler of Billings, MT. Pallbearers will be Chad Olson, Jorgen Bjerkness, Cody Olson, Dale Bjerkness, David Myers and James Mix. Veteran honors will be provided by the Elmer Goche Post 3922, Veterans of Foreign Wars, Wadena, MN. Interment will be at the Sunset Memorial Cemetery, located at Fargo, ND.

The family of James V. Olson created this Life Tributes page to make it easy to share your memories.

Funeral services for James Valdemar Olson of Wadena will be held...

Send flowers to the Olson family.