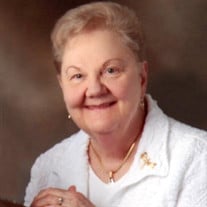 The Mass of Christian Burial for Jane Lois Weber of Wadena, will be celebrated at 11:00 a.m. on Saturday, February 9, at the St. Ann’s Catholic Church in Wadena, MN, with Father Aaron Kuhn as celebrant. The visitation will be held on Friday at St. Ann’s Parish Hall from 4:00 until 7:00 p.m., with a Christian Mothers Rosary at 5:00 and Parish Prayers at 6:00 p.m. The visitation will resume at the church on Saturday from 9:30 a.m. until the time of the Mass. With family at her side, Jane passed away at the age of 85, on Thursday, January 31, 2019, at her home in Wadena, under the tender care of her family and Knute Nelson Homecare & Hospice. Jane was born, one of twelve children, to Peter and Margaret (Hopp) Richter on November 1, 1933, in Wadena, MN. After graduation from Wadena High School, she worked as a telephone operator for Northwestern Bell Telephone for over 20 years. Jane was united in marriage with Ervin Herman Weber at St. Ann’s Catholic Church, in Wadena, on May 9, 1955. Jane’s passion in life was bringing joy to others. The community will remember her performing with her sisters, Mary and Eleanor, as the “Singing Grandmas”. They shared their love of music and laughter at hospitals, nursing homes, with shut-ins, at Empty Stocking and other special community events. She always looked for ways to care for others. Jane especially savored time spent with her children, grandkids and great-grandkids. She was an active member of Christian Mothers and the church choir. She served as St. Ann’s Catholic School librarian and chaired the church rummage sales and bazaar. Jane was preceded in death by her loving husband, Ervin, on October 26, 2018; an infant son; her parents, Peter and Margaret; brothers Raymond, Robert, Edmond, James and Donald Richter; sisters, Eleanor Roggenkamp, Veronica Behmen, and Mary Lehmkuhl; and grandson, Matthew Dworshak. Left to hold Jane in their memories are her children, Thomas (Mary Dee) Weber of Wadena, Timothy Weber of Wadena, Patrick (Vanessa) Weber of Austin, TX, and Angela (Jerald) Dworshak of Moorhead; six grandchildren and six great-grandchildren; siblings, Sophie Roser of Claremont, CA, Jack (Judy) Richter of Verndale and Arnold (Carolyn) Richter of Sebeka; along with numerous in-laws, nieces, nephews and friends. Honorary pallbearers will be Jane’s grandchildren and great-grandchildren. Pallbearers will be Mike Weber, Ken Richter, Randy Richter, Denny Richter, Allen Roggenkamp and Dale Weber. Burial will be in Calvary Cemetery, Wadena, MN.

The Mass of Christian Burial for Jane Lois Weber of Wadena, will be celebrated at 11:00 a.m. on Saturday, February 9, at the St. Ann&#8217;s Catholic Church in Wadena, MN, with Father Aaron Kuhn as celebrant. The visitation will be held on Friday... View Obituary & Service Information

The family of Jane Weber created this Life Tributes page to make it easy to share your memories.

The Mass of Christian Burial for Jane Lois Weber of Wadena, will...

Send flowers to the Weber family.