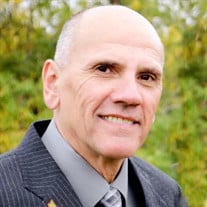 The memorial Mass for Jerome “Jerry” Schwantz of Bertha, and formerly of Clear Lake, will be celebrated at 11:00 a.m. on Friday, March 26, at St. Joseph’s Catholic Church in Bertha, with Father Aaron Kuhn as celebrant. A public visitation will be held at the Domian-Anderson Chapel in Bertha on Thursday from 4:00 until 8:00 p.m. with Prayers at 5:00 p.m. Visitation will resume at the church on Friday from 9:30 a.m. until the time of the Mass. Jerome Leslie Schwantz’s story began on January 1, 1952 -- being the oldest child to Leslie (departed) & Betty Schwantz, but not the last. As the oldest of six, Jerry took the role of big brother seriously, with Steve, Connie, Mark, Kevin (departed) and Brian. He never missed an opportunity to poke fun at them. He carried his art of jokes all the way to the end. Jerry was a kid from Bertha, who grew up to live the American Dream: college basketball career, marriage, a job he loved, house on a lake, raising four kids and later a house near his family, where he fed the birds and deer, while cussing out the squirrels.   After the wedding on July 1, 1972, Jerry was a good husband and took his wife Rosemary fishing for their honeymoon, but supported her in every way after that. He attended every swimming/diving meet, basketball, football, baseball game, and golf tournaments as he was his children’s number one fan. Jerry was a loving father-in-law and loved his children’s spouses like his own. He was a grandpa to Connor, Laila, Jack, Victoria and Jerome, with whom he enjoyed walks in the woods, playing games, tractor rides and sitting around a bonfire. Every Wednesday night you would find Jerry falling asleep while playing cards, because losing a game of Pitch can be tiresome.   Jerry passed away at his home on March 22, 2021, at 11:53 p.m. surrounded by his wife, Rosemary, and children: Kelly, Stacy, Christopher and Lindsey (ordered chronologically, not by best hunting skills).    Jerry touched countless lives and will be deeply missed by family and friends. Fishing trips, hunting seasons, coffee in the morning, and family gatherings will never be the same. As Jerry might say, “do your best, follow your arrow, enjoy every second, shoot straight, and don’t forget to smile”. The family bet is that he is shooting hoops with finesse, playing cards, tossing bean bags, and fishing/hunting with Grandpa and Kevin in heaven. Urn bearers will be Jerry’s siblings. His grandchildren and brother, Kevin †, will be honorary urn bearers.

The memorial Mass for Jerome &#8220;Jerry&#8221; Schwantz of Bertha, and formerly of Clear Lake, will be celebrated at 11:00 a.m. on Friday, March 26, at St. Joseph&#8217;s Catholic Church in Bertha, with Father Aaron Kuhn as celebrant. A... View Obituary & Service Information

The family of Jerome "Jerry" Schwantz created this Life Tributes page to make it easy to share your memories.

The memorial Mass for Jerome “Jerry” Schwantz of Bertha, and...

Send flowers to the Schwantz family.