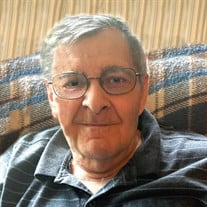 The funeral service for Jerry Hennagir of Fergus Falls, formerly of Parkers Prairie and Bertha, will be held at 10:30 a.m. on Saturday, October 17, 2020 at the Schuller Family Funeral Homes’ Domian-Anderson Chapel, with Pastor Daryl Jacobson presiding. Visitation with family and friends will be held at the Domian-Anderson Chapel on Saturday from 9:30 AM until the time of the service. Jerry, age 75, passed away October 8, 2020, at Lake Region Healthcare in Fergus Falls, MN. Jerry was born to Chester and Ruthie (Persons) Hennagir on September 20, 1945 in Bertha, MN. After school, he farmed in the Bertha / Parkers Prairie area for 44 years. When his parents sold the family farm, he moved with them into their house in Bertha, later moving to the Bertha Manor Apartments. After a short stay in Wadena, he moved to the Synstelien Community Service’s Westside House in Fergus Falls. Jerry enjoyed tinkering with small appliances, having ice cream or a cup of coffee with friends, playing Yahtzee, working on puzzles, and watching a twins game or a western on TV. He found a home at the Westside House and liked to help out by doing odd jobs, fixing things, and occasionally helped cook. He considered the caring staff his family and liked to joke around and tease them. Preceding Jerry in death were his parents Chester and Ruthie; siblings Richard (Charlie), William, Herbert, Marvin, Lila Blashack, Margorie Klemek, Mary Klemek, and Bev Messer. He is survived by in-laws Max Klemek and Darlene Hennagir; along with many nieces, nephews, cousins and friends. Honorary pallbearers are all the past and present residents and employees of the Westside House in Fergus Falls. Serving as pallbearers will be all of Jerry’s nieces and nephews.

The funeral service for Jerry Hennagir of Fergus Falls, formerly of Parkers Prairie and Bertha, will be held at 10:30 a.m. on Saturday, October 17, 2020 at the Schuller Family Funeral Homes&#8217; Domian-Anderson Chapel, with Pastor Daryl Jacobson... View Obituary & Service Information

The family of Jerry Hennagir created this Life Tributes page to make it easy to share your memories.

The funeral service for Jerry Hennagir of Fergus Falls, formerly...

Send flowers to the Hennagir family.