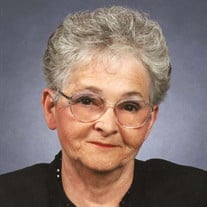 The funeral service for Joan Davis of Verndale will be held at 11:00 a.m. on Friday, April 28 at the Verndale Alliance Church in Verndale, with Pastor Ken Uhren presiding. Visitation will be held on Thursday from 5:00 until 8:00 p.m. at the United Methodist Church in Verndale. Visitation will resume on Friday at the Verndale Alliance Church from 9:30 a.m. until the time of service. Joan passed away surrounded by her family on Sunday, April 23, 2017, at her home in Verndale, MN. Joan Darlene Davis was born to Harold Dellman and Helen Edith (Hines) Harrison on November 30, 1933 in Verndale, MN. Joan was united in marriage with Duane “Butch” Davis on September 6, 1950, in Verndale. They made their home in Verndale where they raised their eight children, and a big garden for canning! Her hands were always busy with knitting, crocheting, sewing, cooking and crafting. She also loved to read, flower garden and spend days at the lake. Best of all was the time shared making memories with her family. As a lifelong Verndale resident she will be remembered as the owner of JD Ceramics and as a member of the American Legion Auxiliary, Lioness Club and Royal Neighbors. Joan was preceded in death by her husband Duane on April 23, 2015; infant children Peter and Mary; her parents Harold Harrison and Helen Harrison McClure; brothers Rod and Orv Harrison and Lee McClure; and aunt and uncle Harry and Loreda Hines. Joan will lovingly be missed by her daughters Sharon (Larry) Brincefield of Wadena, Deb (Steven) Erickson of Verndale, Pam (Keith) Schmidt of Sebeka, and Dena (Sherrod) Russell of Brooklyn Park; sons Charles (Lorinda) Davis of Verndale, Terry (Kathie) Davis of Ottertail, Jim Davis of Golden Valley, and Chad (Cindy) Davis of Brainerd; 20 grandchildren and 41 great-grandchildren; along with brother Lynn McClure of Parkers Prairie. Honorary pallbearers will be Joan’s grandchildren and great-grandchildren. Serving as pallbearers will be Landon Brincefield, Leland Brincefield, Logan Brincefield, Travis Erickson, Kevin Davis, Tyrone Schmidt, Sherrod Russell, Jr, and Joseph Russell. Burial will be in the St. Frederick’s Catholic Cemetery, Verndale, MN. The family expresses their gratitude to caregivers Tracy, Janice, Judy, Rose, Dawn F., Dawn C, and Terena, with special thanks to hospice nurses Alyssa, Denise, and Karen.

The funeral service for Joan Davis of Verndale will be held at 11:00 a.m. on Friday, April 28 at the Verndale Alliance Church in Verndale, with Pastor Ken Uhren presiding. Visitation will be held on Thursday from 5:00 until 8:00 p.m. at the... View Obituary & Service Information

The family of Joan Davis created this Life Tributes page to make it easy to share your memories.

The funeral service for Joan Davis of Verndale will be held at...

Send flowers to the Davis family.