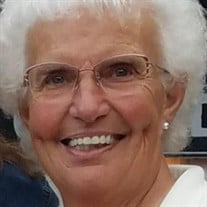 It is with joy and tears we remember the life of Joan Ellen Krabbe Meekins, our mother, grandmother, great-grandmother, sister, and friend. On June 23, 1938, Joan was born to Winifred Rose Gamble Krabbe in Portland, Oregon. She graduated from Burlingame High School and attended Chico State. While living in California, she met her husband, Charles (Chuck) Meekins whom she married October 1, 1960 and with whom she would spend the next 55 years. Their son John was born in 1962 and Lisa followed in 1965. Then, in 1972, Chuck and Joan were surprised with twins, Lois and Heidi. In 1977, Chuck and Joan packed up their family and belongings and headed east from their farm in Grenada, California to a farm in Wadena, Minnesota. There, Chuck and Joan proudly raised cattle for many years. It was here she honed her talent of raising and selling chickens (a task only Heidi and John were willing to take part in). As the family grew, her love for her grandchildren showed in the cookies always ready for them, the warm holidays spent at her home, her attendance at sporting events, and her loving hugs each time they were together. In 2015, Joan lost her husband Chuck, but did not lose herself. She continued “to look after cattle” by renting the pasture. Then, after some time, she hesitantly embraced a move “to town” where she developed a genuine love for her new home and where she continued her hobbies of sewing and knitting for her family and friends. She also enjoyed traveling the country with her children and grandchildren: spending time on the sunny shore of Lake Superior, as a tourist in the streets of Washington, DC, visiting her sister Mary in Vermont, attending a stunning family wedding on the San Francisco Bay, and taking a road trip with her daughter to Medora. We feel privileged to have gotten these additional memories to carry forward with us. Joan was always surrounded by animals. Ruby, Penny, Paisley, Sadie, Harley, & LucyLo, her “grand-pups,” were well-loved and spoiled. Often, their attendance at family events was mandatory. You might consider giving extra treats and pats to your dog as a way to honor Joan. Joan’s legacy shines on vibrantly in those she raised and those whose lives have been touched by her strength and kindness: her sister Mary Krabbe Kerr of Vergennes, VT; her son John (Tina) Meekins of Port Orchard, WA; daughters Lisa (Butch) Meyer of Andover, MN, Lois (Chad) Croonquist of Alexandria, MN, Heidi Meekins of Wadena, MN; grandkids Tiffany Korver, Lesli (Minh) Meekins, Jackson (Jamie) Meekins, Hunter and Logan Croonquist, Cody, Katie, and Colton Dolezal, Alicia and Emily Meyer; great grandchildren, Kaiden, Kalvin, Arthur, Izzy and Jaydyn. Joan passed away surrounded by family on October 2, 2020 and was reunited with Chuck and family and friends who passed before her. Her life will be celebrated with an intimate family gathering.

It is with joy and tears we remember the life of Joan Ellen Krabbe Meekins, our mother, grandmother, great-grandmother, sister, and friend. On June 23, 1938, Joan was born to Winifred Rose Gamble Krabbe in Portland, Oregon. She graduated from... View Obituary & Service Information

The family of Joan Meekins created this Life Tributes page to make it easy to share your memories.

It is with joy and tears we remember the life of Joan Ellen Krabbe...

Send flowers to the Meekins family.