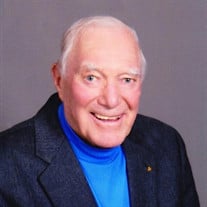 The Mass of Christian Burial for John Conzemius of Wadena will be celebrated at 11:00 AM on Saturday, December 22, 2018, at St. Ann’s Catholic Church in Wadena, with Father Aaron Kuhn as celebrant. Visitation will be held on Friday, December 21 at the St. Ann's Parish Hall from 4-8:00 PM, with a rosary at 6, and Parish Prayers at 7:00 PM. Visitation will continue at the church from 9:30 AM until the time of the service. John was born February 18, 1927, the oldest child of John and Helen (Pazdernik) Conzemius of Breckenridge, MN. He attended Breckenridge High School and Moorhead State Teacher’s College, where he met the love of his life, Donna Mae Brossoit. John graduated with an education and coaching degree in 1950, and dedicated his life to the development and growth of young people. He spent one year coaching and teaching in his home town. In June, 1951 John and Donna were married in Thief River Falls and moved to Wadena, where they made their life-long home. John played semi-professional and amateur baseball and softball in the summers. He spent the school year teaching, coaching football and track, officiating, and later became an administrator and athletic director, spending the rest of his career in the Wadena-Deer Creek Schools. Following his retirement in 1986 John continued his work in athletics, officiating football and basketball and starting track meets, and acting as MSHSL Section 6A Secretary. John was a member of the Minnesota State High School League Hall of Fame, the Minnesota Coaches Association Hall of Fame, the MnIAAA Athletic Director’s Hall of Fame, the Minnesota Football Coaches Association Hall of Fame, and was inducted this fall into the inaugural Wadena-Deer Creek Athletic Hall of Fame. He also received the Minnesota State High School Coaches Association Officials Distinguished Service Award and many other accolades. A devoted Catholic, John spent countless hours volunteering and supporting his beloved St. Ann’s Catholic Church, as well as the community of Wadena. He was always a loyal fan of his players and students and remained in touch with many of them. He recounted numerous stories, and never seemed to forget a name, location, score or a particular play in a game. John spent hours on the greens, especially enjoying the camaraderie of a game of golf with family and friends. John was extremely proud of his children and grandchildren, his siblings, and their families. He cherished time spent playing a game of cribbage or pinochle, sitting by the lake, or just visiting around the campfire. John could make a connection with anyone, anywhere, and he felt a strong love and interest for everyone he met. In 2017 John sold the only house he ever owned and moved into The Meadows of Wadena. On Thursday, December 13, following a series of setbacks in his health, John passed away at Fair Oaks Lodge in Wadena, at the age of 91. He was always appreciative of the care he received at his home at The Meadows of Wadena, in the Tri-County Hospital, and at Fair Oaks Lodge. John was preceded in death by his wife Donna Conzemius, his parents, brothers Bob and Dave Conzemius, and sisters Janice and Dorothy, and brothers-in-law Henry Smude and Gene Shafer. Grateful for having shared his life are his children, Cathy (Thom) Peterson, Park Rapids; Tom (Laurie) Conzemius, Park Rapids; and Mark (Jeanie) Conzemius, Sioux Falls, SD; seven grandchildren, Sara (Robb) Swanson, Katie (Paul) Johanning, Maria (fiancé Andrew Bartell) Conzemius, Joel Conzemius, Paul (Leslie) Conzemius, Annie (William) Thompson, and Helen (fiancé Austin Hogie) Conzemius; eight great grandchildren; sister Lorraine Shafer, brother Mike Conzemius, sisters-in-law Lori Waage,  Elaine Conzemius, and Jackie Conzemius, and many life-long neighbors, special friends and family. Pallbearers will be Joel Conzemius, Paul Conzemius, Paul Johanning, Robb Swanson, William Thompson, Andrew Bartell, and Austin Hogie. Honorary pallbearers will be all the athletes, coaches, and staff of Wadena-Deer Creek Schools. Burial will be in Calvary Cemetery, Wadena, MN. In lieu of flowers, memorial contributions may be made to St Ann’s Catholic Church, Wadena High School Athletics or to Broom Tree Retreat Center.

The Mass of Christian Burial for John Conzemius of Wadena will be celebrated at 11:00 AM on Saturday, December 22, 2018, at St. Ann&#8217;s Catholic Church in Wadena, with Father Aaron Kuhn as celebrant. Visitation will be held on Friday, December... View Obituary & Service Information

The family of John Conzemius created this Life Tributes page to make it easy to share your memories.

The Mass of Christian Burial for John Conzemius of Wadena will...

Send flowers to the Conzemius family.