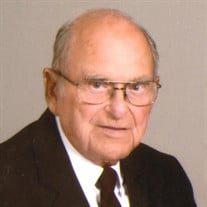 A private Mass of Christian burial for John Edinger of Wadena will be celebrated with his family at St. Ann’s Catholic Church in Wadena, with Father Arlie Sowada as celebrant.   A public no-contact drive-by of condolences will be held on Friday, August 28, from 11:00 until 11:30 a.m. at the Calvary Cemetery in Wadena.   John, age 88, passed away surrounded by his family early on August 24, 2020, at his home in Wadena, MN, with compassionate support provided by Knute Nelson Hospice.   John Leo Edinger was born to Leo and Rose (Pitzl) Edinger on January 7, 1932, in Wadena, MN. He attended St. Ann’s Parochial School through the eighth grade and attended Wadena High School where he competed in high school sports and graduated with the Class of 1950. He served as a Corporal in the US Army during the Korean Conflict from September 1950 until his honorable discharge in May 1952.   John was united in marriage with Catherine Louise Kepner on December 28, 1960, in Clontarf, MN. They made their home in Wadena where John worked as an insurance agent. Lifelong passions included hunting, fishing, and community service. He was a Firearms Safety Instructor, member of the Elks Lodge, Jaycees, Knights of Columbus, the American Legion, Lions, Wadena City Council, Wadena Fire Department, Wadena Parks and Recreation Board and Wadena Baseball Association, along with Knob Hill Sportsman’s Club, MN Deer Hunters Association, the Ottertail Rod and Gun Club, and was an avid supporter of Wadena-Deer Creek High School athletic teams. He was a life-long member of St. Ann's Church, serving as an usher for many years.   Preceding John in death were his parents Leo and Rose; son-in-law Tom Myers; and brother-in-law Captain William Koch USN (Ret).   Memories of John will be held dear by his wife Cathy of Wadena; children Tim (Sarah) Edinger of Nisswa, Mary (Mark) Myers-Reinarts of Hutchinson, and Diane (Jason) Brickley of Duluth; nine grandchildren; and sister Rosemary Koch of Mount Pleasant, SC; and a host of neighbors and friends.   Serving as pallbearers will be his grandchildren, Jack Myers, Luke Myers, Sam Brickley, Josie Myers, Lauren Brickley, Blaise Edinger, Tyler Reinarts, Claire Brickley and Tori Edinger.   Burial will be in Calvary Cemetery, Wadena, MN.   Military honors provided by the Elmer Goche Post 3922, Veterans of Foreign Wars, Wadena, MN.   In lieu of flowers the family suggests memorials be directed to the Wadena Fire Department, MN Deer Hunters Association-Youth Education, and Knute Nelson Hospice.

A private Mass of Christian burial for John Edinger of Wadena will be celebrated with his family at St. Ann&#8217;s Catholic Church in Wadena, with Father Arlie Sowada as celebrant.   A public no-contact drive-by of condolences will be held... View Obituary & Service Information

The family of John Edinger created this Life Tributes page to make it easy to share your memories.

A private Mass of Christian burial for John Edinger of Wadena...

Send flowers to the Edinger family.