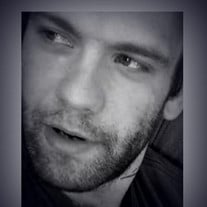 The memorial service for John Alan Greenwaldt Jr., age 29, of Brainerd, MN, will be held at 2:00 p.m. on Saturday, November 18, 2017, at Remnant Ministry Center, 605 Laurel St., Brainerd. Pastor Brian Kimbler will officiate. Family and friends may gather at the Ministry Center one hour prior to the service. John Alan Greenwaldt Jr. was born March 12, 1988 in Staples, Minnesota to John and Renay Greenwaldt. He was baptized at Bartlett Lutheran Church near Verndale. John grew up enjoying the outdoors and family. He attended Brainerd high school. On March 6, 2009 in Brainerd, John was united in marriage to Holly Walters. This union was blessed with three children. They were divorced and John and Brittany were blessed with a daughter in 2016. John enjoyed fishing, hunting, football, wrestling, golf with grandpa Del, and being involved in Jiu Jitsu and cage fighting. Family was very important to John; he was very close to his grandparents, parents, aunts, uncles, cousins, younger sisters and brother. But his greatest joy that he treasured most was his four children. John was a great friend to all who knew him. He was very outgoing and loved to make people smile. He was an amazing chef and this was his career of choice. John was preceded in death by his great grandparents. He is survived by his children Chloe, Hunter, Diane, and Gracelyn; parents Renay (fiancé Dave Lunzer), John Sr (fiancé Kali) Greenwaldt; sisters Mindy (Gus), Stephanie, Heather, Amanda, Marissa, and brother Joshua; grandparents Del and Diane Greenwaldt, and Gerald and Shelba Greenwaldt; along with many aunts, uncles, step-siblings, cousins, nephew, and nieces. A private burial will be held at a later date in the St. Paul Lutheran Cemetery, Bertha, MN.

The family of John A. Greenwaldt Jr. created this Life Tributes page to make it easy to share your memories.

The memorial service for John Alan Greenwaldt Jr., age 29, of...

Send flowers to the Greenwaldt family.