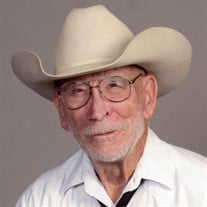 The memorial Mass for John E. Olston, of Parkers Prairie will be celebrated at 11:00 a.m. on Saturday February 26, at St. Joseph's Catholic Church in Bertha, with Father Mitchell Bechtold as celebrant. Family and friends may gather at the church on Saturday from 9:30 a.m. until the time of the Mass. A rosary will be shared at 10:00 a.m. John Everett Olston Sr. of Parkers Prairie, MN went to be with his Lord on February 3, 2022, at St. Williams Living Center in Parkers Prairie surrounded by family.   John was born to Victor and Blanche (Killion) Olston on November 6, 1932, in Pritchett, Colorado.  The family moved several times eventually living in Florence, CO.  John was a proud veteran, serving in the U.S. Army from March 12, 1953 to February 17, 1955 during the Korean War. He was also active with his love of horses and riding bareback broncos in the rodeo.  John was a welder by trade and worked at Climax Molybdenum mine in Leadville, CO. He lived in Buena Vista CO, where he met Ella Laub whom he married in May of 1962 in Taos, NM.  In 1977 John's dream of owning land came to realization when the family moved to 'the farm' in rural Parkers Prairie. John loved everything about living in the country on his own land including being an avid hunter, fisherman, and gardener. John was preceded in death by his beloved son Jessie Earl; parents Victor and Blanche; brother Ralph, and sister Eva May. He is survived by his wife Ella; children Donna Olston, Vicky Olston-Smith (Herb), John Olston (Julie) and Debby Ulve (Casey); grandchildren Courtney (Adam), Derek, Nicolas, Tyler, June, James, Jessa, John and Luke; great grandchildren Dakkota, Skyler, Xander and Able; and sister Etta Marie Miller. John was called Son, Brother, Husband, Dad, Papa, Grandpa or Friend.  John, now celebrating in God's glory, leaves behind those of us missing him with our whole hearts. John very proudly donated his body to the University of MN Anatomy Bequest Program in order to support medical research and education for health professionals.  Honorary urn bearers will be Derek Olston, Nicolas Olston, James Bjork, Tyler Olston, John Ulve and Luke Ulve.   Military honors will be provided by the William Larson Post 366, American Legion, Bertha, MN.   Burial will be held at a later date in St Joseph's Cemetery, Bertha, MN. Memorials may be directed to the Lazy J Horse Rescue, Miltona, MN.

The memorial Mass for John E. Olston, of Parkers Prairie will be celebrated at 11:00 a.m. on Saturday February 26, at St. Joseph's Catholic Church in Bertha, with Father Mitchell Bechtold as celebrant. Family and friends may gather at the... View Obituary & Service Information

The family of John E. Olston Sr. created this Life Tributes page to make it easy to share your memories.

The memorial Mass for John E. Olston, of Parkers Prairie will...

Send flowers to the Olston family.