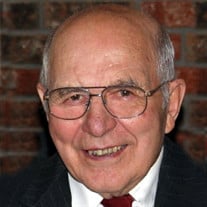 The Mass of Christian burial for Joseph Goeden, Jr. of Wadena will be celebrated at 11:00 a.m. on Monday, April 29, at the St. Ann’s Catholic Church in Wadena, with Father Aaron Kuhn as celebrant. Visitation will be held at the Parish Hall on Sunday from 5:00 until 8:00 p.m., with Prayers at 6:00 and Knights of Columbus Rosary at 7:00 p.m. Visitation will resume at the church on Monday from 9:30 a.m. until the time of the Mass. Joseph, age 95, passed away on April 24, 2019 at the Perham Living Center in Perham, MN. Joseph was born the son of Joseph Goeden Sr. and Catherine (Erhardt ) Goeden on June 19, 1923, at the family farm in Bluffton Township, Otter Tail County, MN. Joe graduated from Wadena High School in 1941. He honorably served his country in the US Army during WWII, in the Philippines and occupied Japan, from December 1944 until his honorable discharge in November 1946, at Ft. Sheridan, Ill. Joe was united in marriage with Lorraine Malone at St. Hubert’s Catholic Church in Bluegrass, MN, on June 7, 1949. They farmed west of Wadena and raised a family of eight children. Joe’s days were filled with the many tasks of farming. In hours away from the chores he enjoyed other outdoor activities such as fishing and hunting. He was always after those exasperating field gophers, too! In retirement, Joe and Lorraine spent many winters in Arizona. Joe was a member of the VFW, the St. Joseph Society and Knights of Columbus. Joe was preceded in death by his parents; his wife, Lorraine, on June 9, 2012; daughter, Annette; son Gerald; brothers, Charles and Leo; and sisters, Catherine and Rosemary. Joseph leaves loving memories for his children, Janel (David) Simmons of Andover; Mark (Linda) of Bismarck, ND, Lyle (Cindy) of Sebeka, Duane (Marion) of Park Rapids, Kevin (Gail) of Wadena, and Philip (Kari) of Alexandria; 23 grandchildren, 26 great grandchildren; along with sisters, Sophia and Margaret. Burial will be in Calvary Cemetery, Wadena, MN. Military honors will be provided by the Elmer Goche Post 3922, Veterans of Foreign Wars, Wadena, MN.

The Mass of Christian burial for Joseph Goeden, Jr. of Wadena will be celebrated at 11:00 a.m. on Monday, April 29, at the St. Ann&#8217;s Catholic Church in Wadena, with Father Aaron Kuhn as celebrant. Visitation will be held at the Parish... View Obituary & Service Information

The family of Joseph Goeden Jr. created this Life Tributes page to make it easy to share your memories.

The Mass of Christian burial for Joseph Goeden, Jr. of Wadena...

Send flowers to the Goeden family.