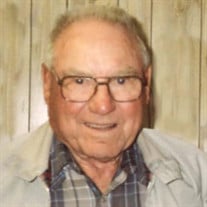 The Mass of Christian burial for Joseph Hammes of Wadena, and formerly of Clitherall, will be celebrated at 11:00 a.m. on Friday, May 10, at St. Ann’s Catholic Church in Wadena, with Father Aaron Kuhn as celebrant. Visitation will be held on Thursday at the Johnson-Schuller chapel in Wadena from 4:00 until 7:00 p.m., with Prayers at 5:00 and a Rosary at 6:00 p.m. Visitation will resume at the church on Friday from 9:30 a.m. until the time of the Mass. Joseph age 93 passed away on Sunday, May 5, 2019, at Tri County Health Care in Wadena, MN. Joseph was born to John and Katherine (Walz) Hammes on September 27, 1925, in Bluffton, MN. He attended country school through the eighth grade. He entered the U.S. Navy on November 10, 1943 in Evansville, IN, and served during WWII in the South Pacific as a machinist on the LST #596 (Landing Ship Tank). He was honorably discharged on May 1, 1946 in Minneapolis, MN. He met Florence Marie Riewer and they were married on November 26, 1949 in Sacred Heart Catholic Church in Frazee. He attended Hanson’s Mechanical Trade School and will be remembered in the community as the owner and operator of Hammes Transfer. Joe was a gifted sportsman who enjoyed hunting and fishing. He grew immense weed free gardens every spring, sharing much of the produce with others.  When not tending to his trucking business he spent many hours on his farm. He was a member of the Central Conservation Association and Knob Hill Sportsman Club. He was a great story teller and jokester to the enjoyment of his family and friends. Joe was preceded in death by his wife, Florence, on July 19, 2003; parents, John and Katherine; in-laws, Theodore and Ameila Riewer; siblings, James and Jonathan Hammes, Rosella Garrett, Louise Ollie, Marion Braith, Helen Perry, Eileen Stafford, and Barb Mason. Left to hold memories of Joe are his children, Tom (Kathy) Hammes of Wadena, Kathy (Craig) Nyberg of Escondido, CA, Mike (Rose) Hammes of Wadena, Susan (Kelly) Roggenkamp of Wadena, Bill Hammes of Verndale, Mary (John) Trout of Wadena, Bob Hammes of Verndale, Joan (Glen) Brakner of Paola, KS, Jean Hammes of Alexandria, MN, and Joseph Hammes, Jr. of Richmond, MN; 24 grandchildren and 24 great-grandchildren; along with siblings, Irene Vittetoe and Ione Marchand. Honorary pallbearers will be all of Joe’s grandchildren. Serving as pallbearers will be Glen Brakner, Tony Palubicki, Wyatt Roggenkamp, Blake Steffen, Luke Trout and Rick Vittetoe. Burial will be in St. Frederick’s Catholic Cemetery, Verndale MN. Military honors provided by the Navy Honor Guard, Minneapolis, MN.

The Mass of Christian burial for Joseph Hammes of Wadena, and formerly of Clitherall, will be celebrated at 11:00 a.m. on Friday, May 10, at St. Ann&#8217;s Catholic Church in Wadena, with Father Aaron Kuhn as celebrant. Visitation will be... View Obituary & Service Information

The family of Joseph Hammes created this Life Tributes page to make it easy to share your memories.

The Mass of Christian burial for Joseph Hammes of Wadena, and...

Send flowers to the Hammes family.