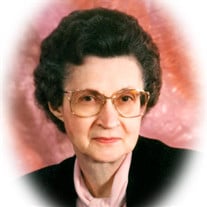 The Mass of Christian Burial for Josephine Kern, a resident of Fair Oaks Lodge, Wadena, MN, will be celebrated at 11:00 a.m. on Saturday, February 3, at the St. Ann’s Catholic Church in Wadena, with Father Aaron Kuhn as celebrant. Visitation will be held on Friday at the Johnson-Schuller Chapel in Wadena from 5:00 until 7:00 p.m. with Prayers at 5:30 p.m. Visitation will resume at the church on Saturday from 9:30 a.m. until the time of the Mass. Just shy of her 98th birthday, Josephine, passed away on Monday, January 29, 2018 at the Fair Oaks Lodge, Wadena, MN. Josephine was born to Joseph and Anna (Redding) Jansen on February 9, 1920, at Genola, MN, and was baptized in the Catholic Church in Buckman. The family moved to Verndale in the spring, where Josephine attended and graduated from the Verndale Public Schools. She was employed as a teacher in Todd and Wadena County country schools. On November 28, 1942, Josephine was united in marriage to Alan L. Kern at St. Frederick’s Catholic Church in Verndale. The couple resided in Hewitt for nine years, then moved to Wadena where they made their home. She was a member of St. Ann’s Catholic Church. Josephine enjoyed music, reading, sewing, working with flowers and time spent with her family. Josephine is survived by her sons Ronald (Marie) Kern of St. Louis Park, and their children Philip (Melanie) and Alison (Stan) Triebenbach; David (Diane) Kern of Monticello and their children Nicole (Jason) Henkemeyer and Angela Kern; 10 great-grandchildren; sister Helen Davis of El Paso, TX; along with three nieces and five nephews. Preceding Josephine in death were her husband, parents; brother Leo Jansen; and sisters Cecelia and Gertrude Jansen. Burial will be in the St. Frederick’s Catholic Cemetery, Verndale, MN.

The Mass of Christian Burial for Josephine Kern, a resident of Fair Oaks Lodge, Wadena, MN, will be celebrated at 11:00 a.m. on Saturday, February 3, at the St. Ann&#8217;s Catholic Church in Wadena, with Father Aaron Kuhn as celebrant. Visitation... View Obituary & Service Information

The family of Josephine Kern created this Life Tributes page to make it easy to share your memories.

The Mass of Christian Burial for Josephine Kern, a resident of...