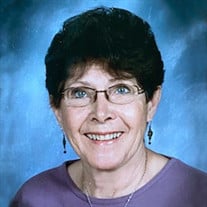 *Note: Due to the heat, the location of the lunch has been changed to an indoor setting. The memorial service celebrating the lives of sisters Judy Taggart, and Laurel Schwartz, both of Wadena, will be held at 11:00 a.m. on Saturday, July 24, at the Johnson-Schuller Chapel in Wadena, with Judy’s close friend and pastor, Bonita Orr presiding. Friends and family may gather at the Johnson-Schuller Chapel on Saturday from 9:30 a.m. until the time of the service. Laurel will be laid to rest immediately following the service in the Wadena cemetery next to her husband Robert. This will be followed by a catered luncheon at Pizza Ranch in downtown Wadena. Judy will be laid to rest with a private service at a later time in Wadena Cemetery. Judy, age 81, passed away on June 16, 2021, at the Heritage Living Center in Park Rapids, MN, under the gentle care of the staff and Kristen from Hospice. Judith “Judy” was born to Arnold and Dorothy (McGovern) Peterson on December 1, 1939, in Verndale, MN, and grew up north of town. After graduating high school, she attended Parisian Beauty College in Minneapolis. She went on her own and opened Miss Judy’s Salon providing haircuts and styling for local community members for 11 years. In addition, she took courses through Moorhead and Bemidji State College, and became the instructor of Cosmetology at Northwest Technical College in Wadena, for 21 years. Judy was united in marriage with James David Taggart on May 16, 1959, at the United Methodist Church in Wadena, where they made their home. In time away from work, she found joy in gardening, camping, and spending time with grandkids. Judy was a member of homemakers. Preceding Judy in death were her husband, Jim; parents, Arnold Peterson and Dorothy and Paul Kingsley; sister and brother-in-law, Laurel and Bob Schwartz; and father-in-law David Taggart. Memories of Judy will remain with her children, Scott (Kim) Taggart of Nowthen and Sandy (Wade Johns) Johnson of Roseau; five grandchildren and three great-grandchildren; siblings Jerry (Colene) Peterson of Banning, CA, and Roberta (Stu) Pinsky of Plymouth; mother-in-law Margaret Taggart of Park Rapids; along with brothers-in-law and sisters-in-law, Rich and Carol Taggart of Wadena and Ron and Margi Taggart of Park Rapids.

*Note: Due to the heat, the location of the lunch has been changed to an indoor setting. The memorial service celebrating the lives of sisters Judy Taggart, and Laurel Schwartz, both of Wadena, will be held at 11:00 a.m. on Saturday, July 24,... View Obituary & Service Information

The family of Judy Taggart created this Life Tributes page to make it easy to share your memories.

*Note: Due to the heat, the location of the lunch has been changed...

Send flowers to the Taggart family.