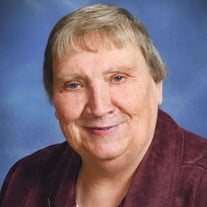 The Mass of Christian Burial for Karen Hopp of Staples, will be celebrated at 10:30 a.m. on Friday, February 8, at the Sacred Heart Catholic Church in Staples, with Father Gabriel Walz as celebrant. Visitation will be held on Thursday at the Schuller Family Funeral Home’s’ Verndale Chapel from 5:00 until 8:00 p.m., with a Rosary at 6:00 and Prayers at 7:45 p.m. Visitation will resume at the church on Friday from 9:00 a.m. until the time of the Mass. Karen, age 77, passed away unexpectedly on Sunday, February 3, 2019, due to a fall at her home in Staples, MN. Karen was born to Matthew Francis and Pearl Lorraine (Stave) Hoemberg on August 11, 1941, at Bertha, MN. Karen was united in marriage with Herbert Hopp on June 14, 1962, at Sacred Heart Catholic Church in Staples. Karen’s days were filled with the tasks of caring for their seven children which involved lots of time spent patching overalls and cooking! She had a special talent for making the tastiest apple pies, and a favorite get-away was an evening of fun and dancing. Karen was preceded in death by her husband Herb on January 13, 2000; her parents Matthew and Pearl; brothers Larry and John Hoemberg; infant twin sisters Janice and Janet; and great-granddaughter Erica Forcier. Karen will be remembered by her children Marianne (Ralph) Boyer of Long Prairie, Nick (Cindy Smith) Hopp of Staples, Beth (Larry) Denault of Hastings, John (Becky Huhta) Hopp of Staples, Bruce (Tammy) Hopp of Hewitt, Michael (Lisa) Hopp of Bertha and Matthew (Autumn) Hopp of Wadena; 29 grandchildren and 19 great-grandchildren; siblings Darlene (David) Krear of Hudson, WI, Connie Putz of Verndale, James (Roberta) Hoemberg of Staples, Dennis (Rita) Hoemberg of Robbinsdale, Thomas Hoemberg (Roxanne Kowalski) of Staples, Marilyn Bell of San Tan Valley, AZ, Mark (Sara) Hoemberg of Staples, Cindy (Rich) Foisy of Chino Hills, CA, Karla Hoemberg of New Hope and Kevin (Denise Roberts) Hoemberg of Brooklyn Park; along with her special friend Jerry Bierschbach. Honorary pallbearers will be Karen’s grandchildren and great-grandchildren. Pallbearers will be Josh Hoemberg, Charlie Hoemberg, Jamie Hopp, Dylan Denault, Kylee Hopp and Kayla Denault. Burial will be in St Frederick’s Catholic Cemetery, Verndale, MN.

The Mass of Christian Burial for Karen Hopp of Staples, will be celebrated at 10:30 a.m. on Friday, February 8, at the Sacred Heart Catholic Church in Staples, with Father Gabriel Walz as celebrant. Visitation will be held on Thursday at the... View Obituary & Service Information

The family of Karen Hopp created this Life Tributes page to make it easy to share your memories.

The Mass of Christian Burial for Karen Hopp of Staples, will...

Send flowers to the Hopp family.