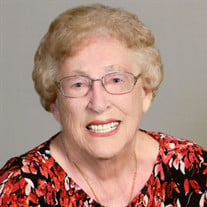 The Mass of Christian Burial for Kathleen McGrane of Wadena, and formerly of Bluffton, will be celebrated at 2:00 p.m. on Thursday, September 20, at St. John the Baptist Catholic Church in Bluffton, with Father Aaron Kuhn as celebrant. Visitation will be held at the church on Thursday from noon until the time of the Mass, with a Rosary starting at 11:30 a.m. provided by the Christian Mothers & Catholic United Fianancial. Kathleen, age 91, passed away in the early hours of September 12, 2018, at the Fair Oaks Lodge, Wadena, MN. Kathleen was born to George and Susan (Weniger) Goeller on November 3, 1926, in Wadena, MN. As a child, she attended grade school in Bluffton. She worked as a hair stylist before marriage. Kathleen was united in marriage with Murl Henry McGrane on June 21, 1949, at St. John the Baptist Catholic Church in Bluffton. They made their home on the farm in Bluffton Township where Kathleen’s days were filled with the many tasks of caring for her family. After 30 years Murl retired and they moved to their home west of Bluffton where they lived for 34 years. In 2013 health issues with Murl initiated a move to Fair Oaks Lodge for Murl and Fair Oaks apartment for Kathleen where she was able to be with Murl and helped care for him until he passed. September of 2017 Kathleen needed assistance herself so she moved to The Meadows of Wadena which had just opened and she was able to live there for a year which brought her great happiness she loved it there, and then to Fair Oaks Lodge where she spent her final 5 days of her life on this earth.  Kathleen was talented with hand-embroidery and was especially fond of raising flowers each year in her garden. She was an active church member, lector, and past President of Christian Mothers. She was also a 4-H leader and a VFW Safety Chairperson. Preceding Kathleen in death were her husband of 66 years, Murl, on August 16, 2015; parents George and Susan Goeller; sons Timothy, Terry and Brian McGrane; and brother, Jim Goeller. Kathleen is survived by her children Victoria (Jim) Klinnert of St. Cloud, MN; Cary (Renita) of Bluffton and Pat (Sally) of Osseo; 9 grandchildren and 14 great-grandchildren; and sister-in-law Ruth McGrane. Pallbearers will be Jamie Klinnert, Timothy Klinnert, David Klinnert, Brian McGrane, Meagan McGrane, Samantha Graf, Mary Harshman, Danielle McGrane, and Michael McGrane. Burial will be in St. John the Baptist Catholic Cemetery, Bluffton, MN.

The Mass of Christian Burial for Kathleen McGrane of Wadena, and formerly of Bluffton, will be celebrated at 2:00 p.m. on Thursday, September 20, at St. John the Baptist Catholic Church in Bluffton, with Father Aaron Kuhn as celebrant. Visitation... View Obituary & Service Information

The family of Kathleen McGrane created this Life Tributes page to make it easy to share your memories.

The Mass of Christian Burial for Kathleen McGrane of Wadena,...

Send flowers to the McGrane family.