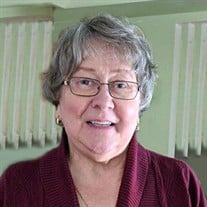 The Mass of Christian Burial for Kathleen “Kathy” Angus of Wadena, will be celebrated at 10:30 a.m. on Wednesday, July 7, at St. Ann’s Catholic Church in Wadena with Father Aaron Kuhn as celebrant. Burial will be in Calvary Cemetery in Wadena following the Mass. Visitation will be held on Tuesday, July 6, from 4:00 until 7:00 p.m. at St. Ann’s Parish Hall, with a Rosary at 5:00 and Prayers at 6:00. Visitation will resume at the church on Wednesday from 9:00 until the time of the Mass. Ms. Angus, 78, of Wadena, MN died peacefully with family members by her side on Friday, June 25, 2021. She was predeceased by her husband, Richard, who died in 1999. She leaves behind six children: Tom (Becky), Tim (Jacki), Krista (Kevin) Kutzman, Terry (Michelle), Michael, and Mark (Kaye) along with 10 grandchildren. Kathleen was born on January 27, 1943 in Melrose, MN, to Roman and Adelinde (Terhaar) Kulzer. She moved with her parents to Sauk Centre, MN where she shared great memories growing up on a farm with her parents and 8 other brothers and sisters. Kathleen married Richard Angus of Garfield, MN, at St. Paul’s Catholic Church in Sauk Centre in 1963. While working and raising a family, Richard and Kathleen lived in several Midwest towns including Rochester, MN, Peoria, IL, Waverly, IA, Jacksonville, IL, and Oconomowoc, WI. During the entire time, Kathleen loved being active at her Catholic Church and entertaining her children and their friends. In 1981, Richard, Kathleen, and the children moved to Wadena, MN. Kathleen worked as a Newspaper Distribution Manager for several years with the Star Tribune. Upon retirement, she spent time volunteering for the church and baking goodies for all. She had a very deep faith and commitment to God.

The Mass of Christian Burial for Kathleen &#8220;Kathy&#8221; Angus of Wadena, will be celebrated at 10:30 a.m. on Wednesday, July 7, at St. Ann&#8217;s Catholic Church in Wadena with Father Aaron Kuhn as celebrant. Burial will be in Calvary... View Obituary & Service Information

The family of Kathy Angus created this Life Tributes page to make it easy to share your memories.

The Mass of Christian Burial for Kathleen “Kathy” Angus of Wadena,...

Send flowers to the Angus family.