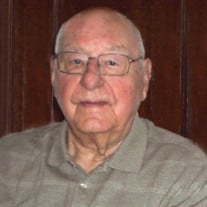 The funeral service for Kenneth Blaske of Hewitt will be held at 2:00p.m. on Tuesday, November 2, at the United Methodist Church in Hewitt, with Pastor Ken Uhren presiding. Visitation will be held on Monday, from 5:00 until 7:00 p.m. at the Domian-Anderson Chapel in Bertha. Visitation will resume at the church on Tuesday from 12:30 p.m. until the time of the service. Ken, age 95, passed away on October 27, 2021, at the Central Todd County Care Center in Clarissa, MN, under the compassionate care of Lakewood Hospice. Ken was born to William and Frieda (Lovitz) Blaske on January 13, 1926, at Sauk Rapids, MN. He attended Sauk Rapids High School until shortly after his 18th birthday when he enlisted in the Navy. He was honorably discharged in 1946 and proceeded to gain his GED. Ken was united in marriage with Marvel Pauline Dull on December 6, 1947 in Sauk Rapids. He attended a one year business program at what was then the St. Cloud Teacher's College and worked at Lakeland Bread Company. When Lakeland opened up a route in the area, he and Marvel moved to Hewitt. After 17 years with Lakeland, he began his career at the 1st National Bank of Bertha, retiring as a vice president and loan officer. He continued with the bank as a board member and in 2015, celebrated 50 years of association. Ken was very active in his community as a member and treasurer of the Hewitt United Methodist Church, Bertha Lions Club, Hewitt Fire Dept. (30 years), and even spent a few years as Hewitt City Clerk. Ken enjoyed playing pinochle, bowling, cutting wood, as well as fishing and hunting. He also enjoyed being a hobby farmer raising corn and hay, not to mention the cattle and chicken he had in his back yard … in town. Preceding Ken in death were his parents William and Frieda; brothers Walter and John; and sister Dorothy Golembeck. Surviving Ken are his loving wife Marvel of Hewitt; children Barbara Arndt of Nelson, WI, Beverly Blaske of Hewitt, Guy (Stacey) of Long Prairie, and Holly (Allan) Knutson of Hewitt; 11 grandchildren and 16 great-grandchildren; brothers Marvin and James; and many nieces, nephews, and friends. Pallbearers will be Ken Ashbaugh, Dale Howe, Steve Peterson, Don McIntire, Gene Kapphahn, and David Anderson. Burial will be in Hewitt Cemetery, Hewitt, MN.

The funeral service for Kenneth Blaske of Hewitt will be held at 2:00p.m. on Tuesday, November 2, at the United Methodist Church in Hewitt, with Pastor Ken Uhren presiding. Visitation will be held on Monday, from 5:00 until 7:00 p.m. at the... View Obituary & Service Information

The family of Kenneth Blaske created this Life Tributes page to make it easy to share your memories.

The funeral service for Kenneth Blaske of Hewitt will be held...

Send flowers to the Blaske family.