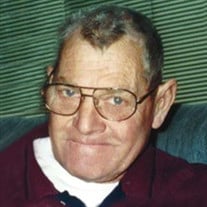 The Celebration of Life memorial service for Kenneth Edin of Cushing, will be held on Friday, March 15, 2019 at 11:00 a.m. at the Lincoln Evangelical Free Church in Cushing with Pastor Don Reigstad presiding. A visitation will be held on Thursday at the church from 6:00-8:00 p.m. and will continue on Friday from 9:30 a.m. until the time of service. Kenneth James Edin, 88, of Cushing, passed away March 9, 2019 at home under the care of Lakewood Health Systems Hospice and with family.  Kenneth was born March 22, 1930 at home in Thomastown Township to Adolph and Mattie Edin.  He graduated from Staples High School in 1948.  He served in the United States Army.  He married Thelma Ann Odland on May 12, 1956 at the Lutheran Church in Wadena MN.  They worked in the cities a year before purchasing a farm in Thomastown Township.  Kenneth farmed and milked cows for over 30 years.  He cut timber during the winter.  When he retired from farming he worked construction for a while and continued to cut timber as long as he could.  He taught his children the value of hard work.  He spent several years visiting shut in elderly people as he enjoyed talking with people.  He liked to fish and pick berries of any kind.  He could often be seen driving his gator out to the woods to get a load of firewood to keep the house warm.  Kenneth loved his Lord and taught Sunday School many years and served as Sunday School Superintendent and on the elder board at the churches he attended.  He enjoyed his family and knew where every grandchild was and what they were doing.  He loved to tell stories and jokes to try to make people laugh.  He would often introduce himself as “Ken, my mother called me that.”  Kenneth was preceded in death by his parents Adolph and Mattie Edin; son Ronald; sister and brother-n-law Evelyn (Lewis) Christopherson; brother-in-law Jack Eyres; and 4 grandchildren Anna Edin, Samantha Edin, Jenna Edin, and Isaac Harding. Kenneth is survived by his wife, Thelma; children: Michael (Bonny) of Angle Inlet, Michele (Maurice) Zwack of Casselton,  ND,  Marcus (Kimberly) of Staples, Randal (Sheila) of Staples, Renee (Dan) Harding of Kilgore,  TX, Thomas (Tina) of Staples, and Jan Edin Fitzer of Edina, 24 grandchildren and 12 great grandchildren, sisters; Marjorie Eyres of Maple Plain, Patricia (Gaylord) Fries of St Louis Park.

The Celebration of Life memorial service for Kenneth Edin of Cushing, will be held on Friday, March 15, 2019 at 11:00 a.m. at the Lincoln Evangelical Free Church in Cushing with Pastor Don Reigstad presiding. A visitation will be held on Thursday... View Obituary & Service Information

The family of Kenneth Edin created this Life Tributes page to make it easy to share your memories.

The Celebration of Life memorial service for Kenneth Edin of...

Send flowers to the Edin family.