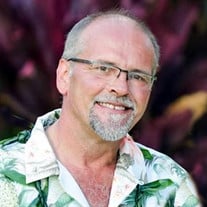 The funeral service celebrating the life of Kirk Lee Voge, age 55 of Bertha, will be held at 11:00 AM on Thursday, February 27, 2020 at the New Life Church of God in Bertha with pastors Jason Knoll and Sarah Collins presiding. The visitation will be held at Schuller Family Funeral Home's Domian-Anderson Chapel in Bertha on Wednesday from 4:00 until 8:00 PM and will continue at the church on Thursday from 9:30 AM until the time of services. Kirk died unexpectedly and peacefully on Friday, February 21, 2020 at his home outside Bertha. Kirk was born in Bertha on January 25, 1965. He graduated from Bertha-Hewitt High School in 1983 and proceeded to study agricultural technology at Detroit Lakes Technical College. He married Kimberly Ann Johnson on May 5, 1990. The two divorced in 2004 but had recently rekindled their love and were to remarry on March 28, 2020. Kirk was a farmer his entire life. He grew up on a farm, and when he came of age, he assumed responsibility for his share of Lone Rock Dairy, the Voge family farm on County Road 1 in Bertha. In the later years of his life, Kirk also worked as a truck driver for Sysco. Kirk’s primary source of pride was his family. He enjoyed every family get-together, and was known for his storytelling. He was both a father and a friend, a role model and a mentor to each of his children. The more friends and significant others his kids brought home, the larger his family grew, and he wasn’t shy about welcoming them to the family. Kirk was preceded in death by his mother, Marilyn Elaine Voge (nee Esteb), who passed away in August 2019. He is survived by his fiancée, Kim Voge (nee Johnson); father Wayne Voge; sons Michael (Amy) Waldvogel, Adam (Alexa) Rae Voge, Logan (Catherine) Voge, Skylar (Bailey Fuchs) Voge and Kole Voge; grandchildren Garrett, Bailey and Joslyn Waldvogel, Crosby and Eleanor Rae Voge, and Robert and William Voge; and siblings Dianne (John) Koch, Brad (Teri) Voge and Craig Voge. In the later years of his life, Kirk acted as a father figure to foreign exchange students Renato Moreno, Beatriz Moreno and Karolina Kasparkova. Honorary casket bearers are all of Kirk’s grandchildren. Active casket bearers are Michael Waldvogel, Adam Rae Voge, Logan Voge, Skylar Voge, Kole Voge and Collin Voge. Interment will be in the Zion Cemetery, rural Bertha. Kirk leaves behind large shoes to fill in his own family and many others.

The funeral service celebrating the life of Kirk Lee Voge, age 55 of Bertha, will be held at 11:00 AM on Thursday, February 27, 2020 at the New Life Church of God in Bertha with pastors Jason Knoll and Sarah Collins presiding. The visitation... View Obituary & Service Information

The family of Kirk Voge created this Life Tributes page to make it easy to share your memories.