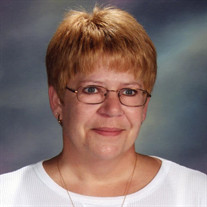 The visitation open house for Kristen Bielema of New York Mills, will be held from 3:00 until 5:00 p.m. on Saturday, April 8, at the Johnson-Schuller Chapel in Wadena. After bravely facing a lengthy bout of cancer, Kristen passed away with family at her side on Wednesday, April 5, 2017, at her home in New York Mills, MN. Kristen Ruth Bielema was born to Garland Verdell and Marjorie Ann (Christopherson) Vongroven on May 22, 1954 in Winona, MN. After completing high school Kristen met Alan Corneil Bielema at the College of St. Theresa in Winona, and they were united in marriage on July 27, 1974 at St. Paul’s Episcopal Church. Alan completed his education at Southern Illinois University, in Carbondale, to become a funeral director while Kristen worked towards her Masters of Art. They moved to Wadena, Minnesota where they purchased the Folkestad Funeral Home in 1985. Kristen started as a substitute teacher at Bertha-Hewitt High School in 1985 and became a full-time teacher in 1986 at Menahga Public Schools. In 1987 she returned to Bertha and was employed as a Speech and Language Pathologist until her retirement in 2014. Alan and Kristen sold the funeral home in 2007 when they moved to their lake home near New York Mills. She will also be remembered for her congeniality as an employee at Time Jewelry in Wadena. In years past, Kristen enjoyed bowling, sewing toys and household necessities, and cooking and baking for her family and friends. Most recently she used her hours in reading, and watching Grey’s Anatomy and Friends on television. Kristen had been a member of the Wadena Women of Today and the VFW Auxiliary. Kristen was preceded in death by her parents Garland and Marjorie, and brother Steven Vongroven. She will be greatly missed by her husband, Alan of New York Mills; son Brian Bielema of Brainerd and daughter Abbey (Josh) Tauring of Brainerd; brother Scott (Pam) Vongroven of Canton, SD; sisters Laurie (Willis) Bale of Eyota, Lynn (Charles) Harstad of Chatfield and Kari (Jeff) Vongroven Durham of Rochester; aunt Karen Haedtke of Winona; sister-in-law Lynn Vongroven of Sturgeon Lake; along with a host of friends, fellow teachers and former students. Burial will be held at a later date in Pleasant Valley Cemetery in Winona, MN.

The visitation open house for Kristen Bielema of New York Mills, will be held from 3:00 until 5:00 p.m. on Saturday, April 8, at the Johnson-Schuller Chapel in Wadena. After bravely facing a lengthy bout of cancer, Kristen passed away with... View Obituary & Service Information

The family of Kristen Bielema created this Life Tributes page to make it easy to share your memories.

Send flowers to the Bielema family.