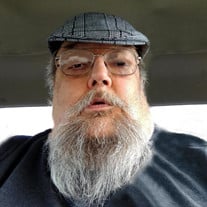 The memorial service for Larry Dague will be held at 2:00 p.m. on Saturday, November 20, at the Verndale Alliance Church in Verndale. Visitation will be held at the church on Saturday, from 12:30 p.m. until the time of the service. Larry, age 68, passed away unexpectedly on November 1, 2021, at Tri County Health Care in Wadena, Minnesota. Larry Gene Dague was born on October 10,1953 at Wesley Hospital in Wadena, Minnesota to Donald and Alberta (Penner) Dague. Larry grew up in Bertha, Minnesota and graduated from Bertha-Hewitt High School with the class of 1971. Larry married Debbie Ratzlaff on June 6, 1975. They lived in several locations, but primarily in the Wadena and New York Mills areas. Larry worked in the agricultural feed business for the majority of his working career. This included Peterson-Biddick in Wadena, Verndale Prairie Feeds in Verndale, Northern Co-op Services in Wadena, and Lakes Area Cooperative in Perham. He also worked at Holiday Station in Wadena and Loomis Armored in the cities. After being semi-retired, Larry worked part-time at Leaf River Ag in Wadena, Rising Phoenix in Wadena, Lakewood Health in Staples and then drove for People’s Express in Wadena until his health no longer allowed him to. Before he became unable to work, Larry enjoyed deer hunting, snowmobiling, four wheeling, and traveling. He loved to drive and went on several long road trips. Later, he enjoyed spending time on the computer and collected some marbles. He and Debbie enjoyed spending as much time together as possible. Larry was “one of a kind” and was known for his wonderful sense of humor and witty comments. He had a big, tender heart and we will miss his deep voice and laugh. Preceding Larry in death were his parents, his brother Don and numerous extended family members. He is survived by his loving wife of 46 years, Debbie; his sister, Carolyn Kaylor; many other relatives and extended family members along with a host of friends. One day we will meet again and our Lord will dry every tear from our eyes. Life is hard but God is faithful and He will sustain us until we are all together again. Peace I leave with you, my peace I give unto you: not as the world giveth, give I unto you. Let not your heart be troubled, neither let it be afraid. John 14:27

The memorial service for Larry Dague will be held at 2:00 p.m. on Saturday, November 20, at the Verndale Alliance Church in Verndale. Visitation will be held at the church on Saturday, from 12:30 p.m. until the time of the service. Larry,... View Obituary & Service Information

The family of Larry Dague created this Life Tributes page to make it easy to share your memories.

Send flowers to the Dague family.