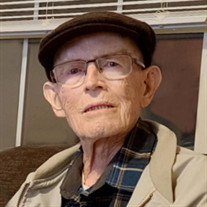 The memorial service celebrating the life of Larry Johnson of Wadena will be held at 2:00 p.m. on Thursday, April 7, at the Schuller Family Funeral Homes & Cremation Services’ Johnson-Schuller Chapel in Wadena, with Pastor Stephen Meltzer presiding. Family and friends may gather at the chapel on Thursday, from 12:30 p.m. until the time of the service. Larry, age 84, passed away at his home in Wadena, on March 24, 2022, surrounded with the compassionate care of his family and Knute Nelson Hospice. Larry was born to Maurice and Laurene “Rene” (Herman) Johnson on November 22, 1937 in Wadena, MN. He joined the US Navy on July 1, 1955 and was honorably discharged November 21, 1958. Larry was united in marriage with Dorothea Mary (Ricklefs) Countryman on September 26, 1980 at Trinity Lutheran Church in Deer Creek. For over 32 years, Larry was a familiar face at Wadena High School where he eventually held the position of head custodian. After retiring, he wanted to remain useful and worked at Golden Russet Potato delivering to many places. He volunteered at the Wadena Food Shelf, delivered Meals On Wheels, and was very active at St. John Lutheran Church. Larry enjoyed motorcycling, camping, reading and spending time with his family. He was a lifetime member of the Wadena VFW. Preceding Larry in death were his parents, Maurice and Laurene; and siblings, Robert A. Johnson and Beverly (DeWayne) Glover. Holding cherished memories of Larry are his loving and caring wife of 41 years, Dorothea; sons Roger Johnson and Mark (Brenda) Johnson both of Wadena; step-children, Linda Brown, and Jeanette (Jim Walter) Hall both of Wadena, Joanne (Richard) Vareberg of Detroit Lakes, and Bob (Susanne) Countryman of Olympia, WA; numerous grandchildren and great-grandchildren; along with friends and former co-workers. Honorary urn bearers will be Larry’s grandchildren. Military honors will be provided by the Elmer Goche Post 3922, Veterans of Foreign Wars, Wadena, MN. Burial will be in Wadena Cemetery, Wadena, MN.

The memorial service celebrating the life of Larry Johnson of Wadena will be held at 2:00 p.m. on Thursday, April 7, at the Schuller Family Funeral Homes & Cremation Services&#8217; Johnson-Schuller Chapel in Wadena, with Pastor Stephen Meltzer... View Obituary & Service Information

The family of Larry Johnson created this Life Tributes page to make it easy to share your memories.

The memorial service celebrating the life of Larry Johnson of...