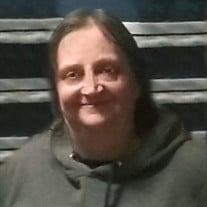 The public funeral service for Laurie Beedle of Hewitt, will be held at 2:00 p.m. on Monday, May 10, at the Johnson-Schuller Chapel in Wadena, with Pastor Amos Self presiding. A public visitation will be held at the Johnson-Schuller Chapel on Monday from 12:30 until the time of the service. Laurie, age 60, passed away on April 28, 2021, at the hospital in St. Cloud, MN. Laurie was born to Wayne and Lila (Sinklen) Hanes on April 12, 1961, in St. Paul, MN. At an early age, her family moved to central Minnesota where she attended high school. Laurie was united in marriage with Bruce E. Beedle on December 4, 1977 in Fargo, ND. They made their home and raised their family near Hewitt. Laurie was a busy homemaker who also assisted with the farm work. Later, she became a caregiver at Oak Ridge Homes. She was a loving woman who had a heart for giving, in addition to making the whole world her family. Preceding Laurie in death were her father, Wayne; sister Cheryl Hanes; and son-in-law Alan Vance. Laurie will be missed by her husband, Bruce, of Hewitt; mother Lila Hanes; daughters, Marie (Alan) Vance of Browerville and Connie (Jeremy) Umland of Verndale; eight grandchildren and numerous brothers and sisters. Serving as casketbearers will be Matthew Umland, Adam Umland, Jarett Vance, Trent Vance, Makail Schroeder and Dillan Warren. Burial will be in Oak Valley Cemetery, near Hewitt, MN.

The family of Laurie Beedle created this Life Tributes page to make it easy to share your memories.

The public funeral service for Laurie Beedle of Hewitt, will...

Send flowers to the Beedle family.