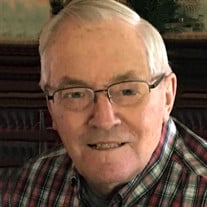 A private graveside service for LaVern Crider was held at Maple Hill Cemetery with Pastor Jacob Heppner presiding. LaVern Maynard Crider was born to Vernon and Melvina (Chapman) Crider on April 5, 1930, at home on a farm near Bertha, MN. When he was a young child, he and his parents moved to the Chapman family farm near Eagle Bend, where his two younger brothers were born and where he lived until he was married. LaVern attended the Crider Country School and then Eagle Bend High School, where he graduated with the class of 1948. LaVern married Genevieve Nelson on January 26, 1952. They first rented a farm in rural Bertha and then in 1954 purchased a farm near his parents, where they raised their five children. In April 2004, after living on the farm for fifty years, they moved to a home in Wadena. Genny passed away on October 19, 2015. LaVern married Audrey Jacobson on his 87th birthday; April 5, 2017. He then moved to the Jacobson farm in rural Clarissa, where he lived until his death. LaVern accepted Christ as his Savior in his youth. He attended the Free Methodist Church until he married Genny. They attended the Free Mission Church in Clarissa for twenty years, before joining Southbrook Baptist Church located in Wadena in 1972. LaVern was a deacon, taught the adult Sunday School class, sang special music and was faithful in his service for Christ. While he enjoyed life, his family and loved ones, he was comforted, particularly as his health declined, in knowing that he would one day be with his Savior. LaVern, age 91, passed away at home on Saturday evening, November 20, 2021, with Audrey at his side. And now, his faith has become sight. LaVern was preceded in death by his parents, Vernon and Melvie Crider; wife Genny; brother Marlin and wife Joanne; grandson Kyle Crider; and son-in-law Gary Kosel. He is survived by: his wife, Audrey; children Jim ( Bonnie), Karen (Morrie) Stenberg, Jan (Lew) Lollar, Brenda (Jim) Ley, and Al (Carolyn); brother, Lyle (Roberta); ten grandchildren & eleven great-grandchildren; Audrey's children Bruce (Robin), Cynthia, Paul (Barbara), Karen, and John (Kristen) Jacobson; her eight grandchildren; as well as many other relatives and friends. “Precious in the sight of the Lord is the death of His saints.“ Psalm 116:15. In lieu of flowers, the family suggests memorials in LaVern’s name be directed to his church or missions as designated by the family.

A private graveside service for LaVern Crider was held at Maple Hill Cemetery with Pastor Jacob Heppner presiding. LaVern Maynard Crider was born to Vernon and Melvina (Chapman) Crider on April 5, 1930, at home on a farm near Bertha, MN. When... View Obituary & Service Information

The family of LaVern Crider created this Life Tributes page to make it easy to share your memories.

A private graveside service for LaVern Crider was held at Maple...

Send flowers to the Crider family.