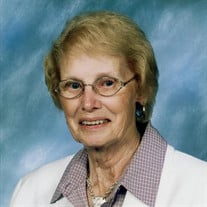 The memorial service celebrating the life of LaVerne Milbradt of Sebeka will be held at 6:00 p.m. on Saturday, June 26, at the Grace Lutheran Church in Sebeka, with Pastor Larry Harvala presiding. Visitation will held at the church on Saturday from 4:00 p.m. until the time of the service.   As quietly as a flying hummingbird, the angels took LaVerne to the Glory of our God in Heaven on December 20, 2020. Our hearts were broken and devastated. LaVerne was under the watch of Lakewood Care Center in Staples, MN. LaVerne Joan Redetzke was born on April 27, 1929, in Butler Township west of Sebeka, MN, at the home of her parents Elmer and Margaret (Kimball) Redetzke. LaVerne was later baptized and confirmed at Zion Lutheran Church, North Germany Township, near Sebeka.  LaVerne worked so hard on the family farm in Butler Township from a young age, milking cows early in the morning before country school. Summers were busy helping her mom with the younger siblings, a big garden, and working in the hay fields. The fall brought the dry dusty threshing after school. LaVerne was determined to graduate from high school which was almost impossible without bussing. During her junior and senior years at Sebeka School she worked as a bookkeeper at the Sebeka Coop Creamery. LaVerne and Ardis (Olson) Kreklau rented an apartment together each year to share expenses. In 1948, LaVerne made her dream come true with her diploma in hand from Sebeka High School!  LaVerne loved to go to dances at the Sebeka West Hall with her friends. She was blessed to meet the love of her life there, Julius Emil Milbradt. They were married on June 15, 1949, at Zion Lutheran Church, North Germany Township, near Sebeka. LaVerne continued as a bookkeeper and Julius as the Sebeka Postmaster until they bought their dream farm in 1951 on County Road 9 in Rockwood Township.  Sadly, Julius was diagnosed with cancer in 1968. He died July 11, 1970, twenty-one years after they were married. The farm has been a proud part of the Milbradt family through advanced techniques and received soil and water conservation awards.   LaVerne found joy in feeding and watching the beautiful hummingbirds out her dining room window. She kept a diary every day, so it was fun to check when the family could be expecting the gorgeous delicate birds to arrive in the spring and leave in the fall! Growing up on a farm was the most challenging, yet rewarding, experience her children could have possessed over the years. From helping birth animals to picking rocks, it was nature’s lessons learned ‘hands on’! LaVerne looked forward to “Tuesday Morning Coffee” with neighbors and friends for over 50 years until their individual health issues started to effect their gathering. LaVerne was an avid cookbook reader and her homemade banana bread and divinity outranked all of her baking! She loved raising flowers that the bees, hummingbirds and butterflies would enjoy, along with her huge vegetable garden. She was a member of the VFW Women’s Auxiliary in Menahga and Wadena, along with 45 years with the American Legion in Sebeka. Everyone who met LaVerne felt her radiating love and giving soul. Her home in Heaven has no pain, only eternal peace that she has so deeply earned.    LaVerne’s family was the light of her life. Surviving are her daughter, Rosalie Schmith of Wadena; sons, Basil Milbradt of Sebeka and Ryan (Kerry Ann) Milbradt of FL; six grandchildren; nine great-grandchildren; along with siblings, Marlyn (Joyce) Redetzke of Sebeka, Donald Redetzke of Tower, Joyce (Bill) Slininger of St. Cloud, and Darlene Hought of Foxhome.     LaVerne was preceded in death by her husband, Julius (7-70);  parents; sons Verlin (10-05), Stacy (6-15) and “Tiny” Lee (9-15); sisters, Delilah Hasbargen, Donna Super and Mavis (infant); brothers, Harold Redetzke and Gordon Redetzke, sisters-in-law, Norma Redetzke and Roseann Redetzke; brothers-in-law, Clarence Hasbargen, Konrad Hought and George Super; and nephews Corey Hought and Jerry Hasbargen. Serving as urn bearers will be her godsons, Joel Erickson and Richard Olson. Honorary urn bearers will be Rosalie Schmith, Basil Milbradt, Ryan Milbradt, Jeramie, Tayler and Tyler Milbradt, Travis, Brandon and Brook Schmith, Virginia Baehner, Todd and Glenda Erickson, John Mantyla, Bo Hoefs, David Eitel, Gary Milbradt, Vickie Tourila, Michael Grewing, and Bill Slininger. Interment will be held at a later date in Zion Lutheran Cemetery, North Germany Township, MN.

The memorial service celebrating the life of LaVerne Milbradt of Sebeka will be held at 6:00 p.m. on Saturday, June 26, at the Grace Lutheran Church in Sebeka, with Pastor Larry Harvala presiding. Visitation will held at the church on Saturday... View Obituary & Service Information

The family of LaVerne Milbradt created this Life Tributes page to make it easy to share your memories.

The memorial service celebrating the life of LaVerne Milbradt...

Send flowers to the Milbradt family.