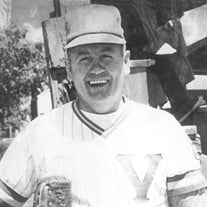 A gathering of family and friends celebrating the life of Lee Denny, age 90, of Staples and formerly of Verndale, will be held from 4:00 until 7:00 p.m. on Thursday, June 14, at the Verndale Alliance Church, Verndale, MN. A Time of Prayer and Sharing will begin at 6:00 p.m. Lee Edwin Denny, a lifelong resident of Verndale, MN, passed away at the age of 90, on May 29, 2018, at the Lakewood Care Center in Staples, MN, after a courageous battle of 16 years with Alzheimer’s Disease. He was born on July 9, 1927 to Paul and Daphne (Snow) Denny in Wadena, MN. Lee was lovingly married to his wife of 67 years, Donna (Coleman) on March 30, 1951. He and Donna had five children; Rick (Brenda) Denny of Colorado Springs, CO; Ronnie (Robin) Denny of St. Cloud, MN; Shari (Brad) Schmidt of Fort Worth, TX; Roger (Candy) Denny of Crystal, MN; and Randy (Juli) Denny of Shoreview, MN.  Lee’s life revolved around his family, his career and baseball. Lee attended Verndale Public Schools until he enlisted in the Navy in 1944. Stationed in Washington State, Lee found a passion for the game of baseball. After discharging from the Navy in 1947, he continued his baseball career playing for the Verndale Bison. Throughout his career as a 3rd baseman, he was fortunate enough to play alongside his four sons. Lee had the privilege of being inducted into the Minnesota Amateur Baseball Hall of Fame in 1976. Lee was employed as a Holsum Bread Truck driver for 33 years, and also worked for Ernie’s Food in his retirement. He was a member of the Verndale Christian Missionary Alliance. Lee spent most of his time fishing, hunting, gardening, shaking dice with his buddies and watching the Minnesota Twins and Vikings. He will be remembered by those who had the pleasure of knowing him, as a man with a constant smile and laugh, who loved to tease all of those around him.  He will forever be remembered as a devoted husband, father, and grandfather to his 11 grandchildren and one great-grandchild. He is also be survived by many relatives and friends. Lee was preceded in death by his parents, Paul and Daphne, as well as his sister and brother-in-law, Ruth and Bently Conn. Military honors provided by Elmer Goche post 3922, Veterans of Foreign Wars, Wadena, MN. Private burial will held at Green Lawn Cemetery, Verndale, MN.

A gathering of family and friends celebrating the life of Lee Denny, age 90, of Staples and formerly of Verndale, will be held from 4:00 until 7:00 p.m. on Thursday, June 14, at the Verndale Alliance Church, Verndale, MN. A Time of Prayer and... View Obituary & Service Information

The family of Lee Denny created this Life Tributes page to make it easy to share your memories.

A gathering of family and friends celebrating the life of Lee...

Send flowers to the Denny family.