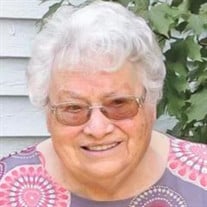 Funeral services for Leila Allen of rural Staples will take place at 11:00 a.m. on Thursday, March 10, 2022 at the Church of Christ in Staples with Pastor Barry Klein presiding. A visitation will be held at the church on Wednesday from 4:00 until 8:00 p.m. and continue at the church on Thursday from 9:30 a.m. until the time of services. Leila passed away at the age of 81 on Sunday, March 6, 2022 at the Lakewood Health Systems Care Center in Staples with family by her side and under the gentle care of Lakewood Hospice. Leila Minnie Irish was born to Charles and Grace (Sanford) Irish on December 6, 1940, in Belgrade, NE, where she also attended country school. In later years she attended high school in Eagle Bend and Little Falls, MN. Leila was united in marriage with Richard Allen on August 3, 1957, in Staples. They resided in several places but called Staples home for the last 50-plus years. Leila earned a degree in Graphic Arts in 1985 and worked as a graphic artist and as a home health care aid. Away from work, she loved all things involving her family; camping, four-wheeling, bonfires, stumpnics (winter picnics) and being outdoors. She enjoyed dancing and organizing dances in Staples and surrounding communities. She also liked to play cards, especially Bridge. Leila was an avid treasure hunter when it came to garage sales, and casino stops in Minnesota, and North and South Dakota meant fun, too! Preceding Leila in death were her parents, Charles and Grace; brothers, Leonard and Lester Irish; and infant daughter, Pamela. Memories of Leila will remain with her husband Richard; children, Richard Allen of Staples, Terri (Jim) Trantina of Browerville, Sherry (Dennis) Booth of Elk River, John (Kelsey) Allen of Staples, Lloyd (Loree) Allen of Browerville and Dale (Jennifer) Allen of Aldrich; 15 grandchildren and 11 great-grandchildren; sister, Lois (Al) Greenwaldt and sister-in-law, Beryl Irish. Serving as casket bearers will be James Trantina, Daniel Booth, Derek Booth, Dennis “DJ” Booth, Jeffrey Allen, Evan Allen, Elliot Allen and Everett Allen. Burial will be held at a later date in Evergreen Hill Cemetery, Staples, MN.

Funeral services for Leila Allen of rural Staples will take place at 11:00 a.m. on Thursday, March 10, 2022 at the Church of Christ in Staples with Pastor Barry Klein presiding. A visitation will be held at the church on Wednesday from 4:00... View Obituary & Service Information

The family of Leila Allen created this Life Tributes page to make it easy to share your memories.