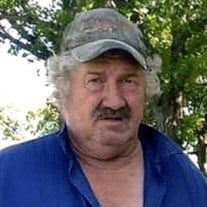 The funeral service for Leland Snook of Deer Creek, will be held at 2:00 p.m. on Saturday, March 19, at the Johnson-Schuller Chapel in Wadena, with Dale Leehy presiding. Visitation will be held at the Johnson-Schuller Chapel on Saturday, from 12:30 p.m. until the time of the service. Unexpectedly at age 68, Leland passed away of natural causes on March 14, 2022, in Deer Creek, MN. Leland was born to Loyd and Christina (Anderson) Snook on May 4, 1953, in Parkers Prairie, MN. He attended Henning High School before becoming a dairy farmer with the demanding tasks that involves. He also painted and worked as a bus driver and cement truck driver. Away from work he looked forward to hunting and fishing. He liked to say, “You’re never gonna learn any younger!” Leland married Linda Jean Tuffs on July 17, 1976 in Deer Creek. They lived on the farm south of Deer Creek where Leland spent his entire life. They raised their daughters and son, and later parted ways. Preceding Leland in death were his parents, Loyd and Christina; son, David; sister Elsie Husfeldt and brothers, Carl and George Snook. Remembering Leland will be his daughters, Charlotte Snook of Deer Creek and Kayla (Justin) Burnett of Hewitt; six grandchildren and seven great-grandchildren; the mother of his children, Linda; siblings, Ken Snook, JoAnn Turchin and Deloris Turchin; along with numerous nieces and nephews. Honorary casket bearers will be Kali Jo, Zachary, Parker, Sophie, Jace, Mason, Luca, Mckenna, Kingston and James. Serving as casket bearers will be Austin Helmbrecht, Jonathan Snook, Justin Burnett, Gayle Snook, Harold Matthews and Kevin South. Burial will be in Inman Cemetery, near Henning, MN.

The family of Leland Snook created this Life Tributes page to make it easy to share your memories.

The funeral service for Leland Snook of Deer Creek, will be held...

Send flowers to the Snook family.