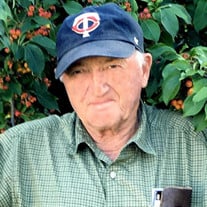 The public funeral service for Leo Wallace, of Wadena, will be held at 11:00 a.m. on Saturday, February 20, at the Johnson-Schuller Chapel in Wadena, with Pastor Kali Christensen presiding.   A public visitation will be held at Johnson-Schuller Chapel on Friday from 4:00 until 7:00 p.m. and will resume at the chapel on Saturday from 9:30 a.m. until the time of the service.   Leo, age 84, passed away on February 10, 2021, at his home in Wadena, MN, with the loving care of his family and Knute Nelson Hospice. Leo was born to Clifford and Helene (Henning) Wallace on April 11, 1936, in Buffalo Center, IA.  His family moved to the area in 1942, where he attended country school and Union Corners Church.   Leo was united in marriage with Carol Joyce Sandburg on August 9, 1958, at the Faith Lilac Way Evangelical Lutheran Church in Robbinsdale, MN. He served in the US Army from 1958 until his honorable discharge in 1960, having been stationed in Ft. Carson, Co, Ft Ord, CA, Camp Drum, NY and Ft Devens, MA.   During his working years, Leo was extremely proud to manage the Fleet Store in Litchfield, work as a farmer, and drive truck for Timber Roots in Wadena.   Hours away from work, Leo found joy in the outdoors and hunting. He could be found striking up conversations at auctions and garage sales. He enjoyed a good parade and town celebrations, but most of all, time spent with family!   Leo will be remembered for his helpful and generous spirit, his fun-loving sense of humor, and his strong work ethic.  He handed out candy and 50 cent pieces on a regular basis to family and strangers alike.  His legendary vocabulary included, but was not limited to: “by golly!”, “by jiminy!”, “it’s a bearcat!”, and “it’s a corker!”.   Preceding Leo in death were his parents, Clifford and Helene; siblings, Jack Wallace, and Myrna Ternes; brothers-in-law, Isadore Ternes and Vern Strehlow; and nephew, Randy Ternes.   Memories of Leo will be treasured by his loving wife of 62 years, Carol; children, Cheryl Whitchurch of Alexandria, Scott (Darla) Wallace of Houston, MN, Todd Wallace of Melrose, and Kirk Wallace of Wadena; grandchildren, Derek (Brittany), Brennan (Megan), Jaden, Dave, McKenna Wallace, Andrew and Zach (Vanessa) Whitchurch, and Brooke Lorentz; great-grandchildren, Vivian, William, and Jameson Wallace; siblings, Marlene Strehlow and Roger Wallace; sister-in-law, Carol Wallace of Wadena; along with several nieces and nephews.   Serving as pallbearers will be Leo’s grandchildren.   Burial will be in Wadena Cemetery, Wadena, MN.   The family prefers memorials be directed to the Boys & Girls Club, or Knute Nelson Hospice.

The family of Leo Wallace created this Life Tributes page to make it easy to share your memories.

The public funeral service for Leo Wallace, of Wadena, will be...

Send flowers to the Wallace family.