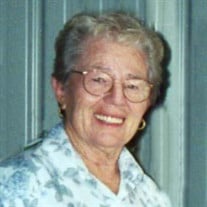 The funeral service for Leona Johnson of Menahga, will be held at 11:00 a.m. on Thursday, September 16, at the Hope Chapel in rural Verndale, with Reverend Neal Malcore presiding. Burial will be in Sebeka West Cemetery. Visitation will be held at the church on Thursday from 9:30 a.m. until the time of the service. Leona F. Johnson, age 93 made her journey to heaven on Friday, September 10, 2021. She was born on March 5, 1928, in Rockwood Township, Sebeka, MN, the daughter of Harold and Vera (Stephenson) Arildsen. Leona graduated from Sebeka High School in 1946 and on January 12, 1947, was united in marriage to Gail Johnson at her parent's home in Sebeka, MN. The marriage was blessed with six children. After a trip to California, they built a home and settled on her husband's family farm. She was a busy homemaker for several years raising six children and later worked for S & L Department store in Wadena and various other jobs until she fully retired. Leona and Gail traveled to many states, trips to Denmark and later for many years, wintered in Arizona and New Mexico. Her hobbies included reading, gardening, baking, sewing, fishing and camping. She was an active member of Caballo Church in New Mexico and Hope Chapel. Other activities included, Ladies Aid, Bible Study, Red Hats & Homemakers Club. Leona was a loving mother, grandmother, sister, aunt and was devoted to family. She would always find time to be a caregiver to those in need. She was very social and joined any group that came along. Many hours were spent sewing, baking, ceramics, and embroidery. She prided herself on being able to read several books at once. Leona is survived by daughter-in-law Mary Johnson of Lake Panasoffkee, FL; children David (Robin) Johnson, Los Lunas, NM, Barbara Barth, Park Rapids, Virginia (Robert) Deeds, Bemidji, Gaylene Kozak, Albuquerque, NM, and Harold Johnson, Staples; 15 grandchildren, 42 great-grandchildren, 3 great-great-grandchildren. Leona was preceded in death by her parents; husband, Gail; son, Darrel Johnson; brother, Roger Arildsen; sister, Joyce Flannagan; grandson, Richard Lewis; and great grandson, Christian Johnson.

The funeral service for Leona Johnson of Menahga, will be held at 11:00 a.m. on Thursday, September 16, at the Hope Chapel in rural Verndale, with Reverend Neal Malcore presiding. Burial will be in Sebeka West Cemetery. Visitation will... View Obituary & Service Information

The family of Leona Johnson created this Life Tributes page to make it easy to share your memories.

The funeral service for Leona Johnson of Menahga, will be held...