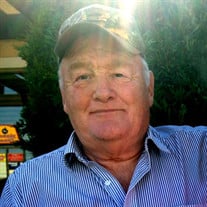 Leonard Ray Lowers, Jr, born In Exira, IA, raised In Bertha and Wadena, MN, and currently residing in Ashby, MN, died suddenly Saturday, January 12, 2019, in Wadena at the age of 69. Leonard was born October 26,1949 to Leonard Ray Lowers, Sr and Rosalle (Jessen) Lowers. He was the youngest of four children. He graduated from Wadena High School and subsequently began his career in over-the-road trucking. Together with his first wife, Sheila Schmitz, Leonard, Jr is father to three daughters: Kelly (Brian) Kimber of Perham, Kimberly (Shawn) Lowers of Verndale, Kristi (Jason) Lowers of Bertha; and three sons: Doug (Kari) Lowers of Wadena, Scott Lowers of Bertha, and Matthew Lowers of Mankato. He has nineteen grandchildren and five great grandchildren. Leonard was united in sacred marriage to Marla Mary Turner on June 22, 2017 at Grace Church in Erhard, MN. They made their home in Ashby, MN. He bravely stepped into the role of step-dad to her eleven children, and step-granddad to her six grandchildren. Together, Leonard and Maria loved to take road trips, fish and hike, explore new restaurants, and challenge each other to find new roads to travel that Leonard had never been on before, That part was very difficult, but often filled with adventure and discovery. They also had plans to serve the Lord together on mission trips where Marla would focus on health care and Leonard would help build new schools and churches. Unfortunately, Leonard's health declined before they were able to make those plans a reality. Leonard was preceded in death by his brother, Herbert, in 2007, his mother in 2010, and his father in 2016. An open house gathering of family and friends for Leonard Ray Lowers, Jr. of Wadena will take place on Thursday, January 24, 2019, from 10:00 a.m. until 12 noon at the Schuller Family Funeral Homes' Johnson-Schuller Chapel in Wadena, with a time of remembrance at 11:00 a.m. led by Pastor Eric Uggerud.

The family of Leonard Lowers Jr. created this Life Tributes page to make it easy to share your memories.

Send flowers to the Lowers family.