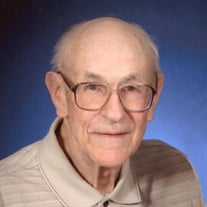 The funeral service for LeRoy “BeBe” Kresien of Wadena will be held privately at the family’s request. LeRoy, age 94, passed away on Monday, September 28, 2020, at the Fair Oaks Lodge, Wadena, MN. LeRoy Richard Kresien was born at Wesley Hospital in Wadena, MN, on May 29, 1926. He was the second of three boys born to Ernest and Martha (Skalisky) Kresien. LeRoy attended Wadena High School where he was known as “BeBe”. He was a member of the track team and played on the basketball team that won the District 24, in 1943! BeBe graduated in 1944 and was drafted into the US Army. After basic training he was shipped out on the Queen Elizabeth to serve his country in WWII. He was honorably discharged in 1946, and returned to Wadena to work with the City Dray, unloading freight and delivering it to the stores. He unloaded lumber by hand along with coal for the stores. BeBe also loaded boxcars on the Great Northern Railroad for Homecrest, Ind. LeRoy was united in marriage on August 16, 1952, with Donna Jean Devereaux at the Immanuel Lutheran Church in Wadena. They liked to travel and visited many of the states and Canada. In addition, they raised Black Angus on their farm east of Wadena. LeRoy purchased the City Dray in 1963 and operated it for over 30 years until he retired in 1994. Time away from work found him active in sports, softball, baseball and bowling, and enjoying the outdoors while hunting and fishing. Lots of memories were made at the cabin on Little Pine Lake near Perham. LeRoy belonged to Immanuel Lutheran Church, was a life member of the VFW and charter member of the Elks Lodge, and served as director of the ABC (American Bowling Congress). Preceding LeRoy in death were his parents; brothers Ernest, Jr and Wally; and nephews Ronald and Thomas. His memory will be cherished by his devoted wife of 68 years, Donna; along with many relatives and friends. Military honors provided by the Elmer Goche Post 3922, Veterans of Foreign Wars, Wadena, MN. Burial will be at Wadena Cemetery, Wadena, MN. Memorials may be directed to the Mission Endowment Fund, c/o Immanuel Lutheran Church, PO Box 69, Wadena, MN.

The family of LeRoy "BeBe" Kresien created this Life Tributes page to make it easy to share your memories.

The funeral service for LeRoy “BeBe” Kresien of Wadena will be...

Send flowers to the Kresien family.