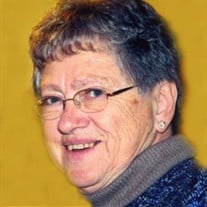 The celebration of life service for Linda Peterson will be held at 11:00 AM on Tuesday, January 30, 2018 at the Faith Lutheran Church in Eagle Bend with Pastor Allen Mortenson presiding. Visitation will take place at the church on Tuesday from 9:30 AM until the time of service.  Linda Lou (Schoneman) Peterson left this earthly world and celebrated her heavenly birthday on January 27, 2018.   Linda was born June 3, 1941 in Delton Township, Cottonwood County to William and Verna (Quade) Schoneman. She grew up spending most of her years on a farm in Bertha. After graduating from Bertha High School, Linda nannied in Fergus Falls, then moved to Minneapolis with a number of girlfriends. While on a weekend escapade, Linda met Duane Peterson at the Clarissa Ballroom. They were married in 1962 and celebrated 55 years together in August 2017.   Linda worked at Northwest Bank in downtown Minneapolis until 1966, when Steven was born. She then did daycare for friends until moving to the Peterson homestead in Eagle Bend, MN in 1967. Jodi was born in 1968. Linda spent her years on the farm raising not only her own children, but several of the neighborhood kids. She took up sewing and other handcrafts and became a talented seamstress making everything from doll clothes to wedding dresses. Later, Linda took up quilting and it became a passion. No scrap of fabric was too big or too small; and all quilts, regardless of beauty, had a purpose.   In 1986 Linda decided to pursue another calling and went to school to become a CNA. She truly enjoyed this calling and worked at the Clarissa Nursing Home for 23 ½ years. She loved the ‘crew’ and enjoyed being a part of each resident’s life.   Linda was active in many groups over the years. She loved playing cards with the neighborhood card club, a Canasta Club and at the local Senior Center. She was an active member of Homemaker’s, the Ladies Aide, the Rose City Threshing Club, Red Hats, blood drives, food and senior’s programs and several quilting groups, most notably Quilts of Valor in Perham, MN. She was also an integral member of the Senior’s Board responsible for bringing Hilltop Regional Kitchen to fruition in its new location in Eagle Bend. She loved to travel and went on trips overseas with the local high schoolers and on mission trips with the Quilts of Valor group delivering hundreds of quilts to veterans all over the country.   Linda’s life was full of faith and purpose. Her hands were never idle and her time was spent helping others in ways that she deliberately wanted to be unnoticed and unmentioned. In 2014 Linda was diagnosed and treated for breast cancer which started a movement for several of her friends to make chemo caps for many of the hospitals in the area. The cancer triggered a rare autoimmune disease in 2017 that ultimately left her paralyzed. She continued to live with purpose and grace spending her final months at St. Williams Living Center.   She was preceded in death by her parents; William and Verna Schoneman; brothers Duane and Arlan; sister Cleone; and many aunts, uncles and cousins.   Linda is survived by her husband, Duane; son Steven (Paige) Peterson of Sharpsburg, GA; daughter Jodi (Rick) Bruns of Le Sueur, MN; grandchildren Sean and Aubin Bruns and Nate and Nick Peterson; sister-in-law Carrol Peterson and countless nieces, nephews, extended family and friends.   Blessed were all whose lives Linda touched, known and unknown. Cherished is her memory.   In lieu of flowers, memorials preferred to Hilltop Regional Kitchen, Quilters Embrace, Relay for Life or any other community organization of your choice.

The celebration of life service for Linda Peterson will be held at 11:00 AM on Tuesday, January 30, 2018 at the Faith Lutheran Church in Eagle Bend with Pastor Allen Mortenson presiding. Visitation will take place at the church on Tuesday from... View Obituary & Service Information

The family of Linda Peterson created this Life Tributes page to make it easy to share your memories.

The celebration of life service for Linda Peterson will be held...

Send flowers to the Peterson family.