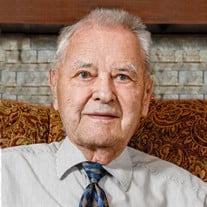 The funeral service for Loren Mosman, formerly of Wadena, will be held at 10:30 a.m. on Saturday, October 16, at the Wadena Alliance Church in Wadena with Pastors Vaughn White and Brian Malvig presiding. Visitation will be held at the church on Saturday, from 9:00 a.m. until the time of the service. *The family requests that everyone wear a mask when attending the visitation and service.* Loren Willis Mosman passed away peacefully in his home at St. Therese on Oxbow Lake care center, Brooklyn Park, MN on October 12, 2021. Loren was born in Staples, MN on January 22, 1924 as the first of six children to his parents, Willard and Stella (Larson) Mosman. Loren carried forward his mother’s practical sensibilities and nurturing affection and his father’s talent as a craftsman and interest in the Northern Pacific Railroad.  Loren graduated from Staples High School in 1942 and served three years as a motor machinist in the Navy. His service included managing the distillation of salt water to fresh water on the PT boat tender, USS Wachapreague stationed in the Philippine Islands. He made it all the way to Australia before retracing his steps back to the US. Returning safely from war, Loren jumped on the GI Bill to complete his degree in Industrial Arts at Pacific Lutheran College in Tacoma, WA. He soon transferred to St. Cloud State Teachers College to woo his number one girl and love of his life, Audrey Iola Carlson, who he married on July 30, 1949. The couple celebrated 64 years of marriage before her death in Jan 2015. Loren graduated in 1950 with a Bachelor of Science and taught at various schools with Audrey before settling in Wadena, MN teaching industrial Arts and driver’s education for decades before retirement. Loren was actively involved with the Christian and Missionary Alliance church in Wadena for decades.  He was a founding member of the C&MA church camp, Big Sandy in MacGregor, MN. He and his wife were craft directors of northern youth camps for many years. Loren and Audrey were great travelers. They camped their way across most of the country meeting new friends and visiting old ones.  In their later years, they were regular participants in Christian Campers. After retirement, they wintered in Bibleville Conference Grounds in Alamo, TX for over 20 years, ministering with the missionary work of Rio Grande Bible Ministries. Loren had an incredible gift for creating with his hands for function, amusement, and art. Loren’s prize project was building his own home in Wadena, MN. He was the go-to person for carpentry for both practical and creative needs for his community. His interests included painting, stained glass work, leather work, model railroads, sketching, and he was endlessly fascinated with his talent for creating with his hands. Loren had a marvelous melodic voice that he sang with in barbershop quartets in the Navy, with friends at church, in community choirs, and in every day up until his last. He  will be missed dearly by his family. Survived by twin sons Dennis of Maple Grove, MN, Douglas (Wendy) of Maple Grove; grandchildren Sara Peloquin (Peter) of Coon Rapids, MN; Lexie Thorpe (Brandon) of Maple Grove, MN, Joshua Mosman of Maple Grove, MN, Caitlin Mosman Block (Wes) of Madison, WI and four great-grandchildren, Vivienne, Charlotte, Minta, and Flora; sister Sharon (Jourdan) Sullivan of Underwood, MN; and brother Wally of Minneapolis, MN. Preceded in death by wife Audrey and daughter-in-law Sylvia Thorpe, parents, Willard and Stella, and brothers, Glen and Ron, and sister, Jenile. Burial will be in Wadena Cemetery, Wadena, MN.

The funeral service for Loren Mosman, formerly of Wadena, will be held at 10:30 a.m. on Saturday, October 16, at the Wadena Alliance Church in Wadena with Pastors Vaughn White and Brian Malvig presiding. Visitation will be held at the church... View Obituary & Service Information

The family of Loren Mosman created this Life Tributes page to make it easy to share your memories.

The funeral service for Loren Mosman, formerly of Wadena, will...

Send flowers to the Mosman family.