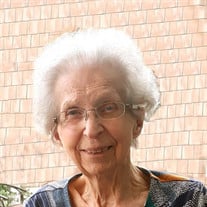 The public funeral service for Lorraine Taggart of Verndale, will be held at 2:00 p.m. on Friday, January 8, at Joyful Spirit United Methodist Church (currently in the First Congregational United Church of Christ building) in Wadena, with Pastor Kevin Gregory presiding. A visitation for family and friends will be held at the church on Friday from 12:30 p.m. until the time of the service. Lorraine, age 89, of Verndale, passed away on December 27, 2020 at the Lakewood Health System in Staples, MN. Lorraine Katherine was born to Edgar and Agnes (Petsinger) Tetrault on July 23, 1931 in Rolla, ND, where she was raised until family moved to a farm north of Verndale and she completed her high school education at Wadena High School in 1949. Lorraine was united in marriage with Lyle Norton Grow on November 13, 1950 at St. Frederick’s Catholic Church in Verndale. She and Lyle farmed until Lyle passed away September 15, 1964. Lorraine remained on the farm, attended Wadena Vo-Tech, and worked at the Wadena State Bank until she married Darrel Eugene Conn March 8, 1969. They moved into Wadena where they lived until the children were out of school. They then moved to Frazee until, sadly, Darrel passed away, also. Lorraine moved back to Wadena and worked as a bookkeeper at Zosel's Hardware. She was married again in June of 1990 to Clyde Ansel Taggart in Wadena. They resided in rural Wadena.   Lorraine's favorite duties were that of a loving wife and mother. Her hands were busy caring for her family, crocheting, embroidering, playing cards, and quilting with fellow church members. She liked to travel and found time to volunteer as a Pink Lady at the Tri County Hospital in Wadena for over 20 years.   Preceding Lorraine in death were her husbands, Lyle Grow, Darrel Conn and Clyde Taggart; parents Edgar and Agnes; children Connie Sweere and Doug Taggart; grandchildren Derek Sweere and Jerry Pounds; great-grandchild Chloe Conn; and brother Elwood Tetrault.   She is survived by her family with Lyle: Steven (Naomi) Grow of Moorhead, Joanne (Don) Line of Verndale, and Cheryl (Kirk) Scholz of Park Rapids; her family with Darrel: Carol (Jerry) Pounds of Minneapolis, Douglas (Karen) Conn of Albert Lee, Jerry (Char) Conn of Detroit Lakes, and Michael (Tammy) Conn of Red Lake Falls; her family with Clyde: Bill Taggart of Tennessee, Steve Taggart of Michigan, and Gail Simpson of St. Paul; numerous grandchildren, great-grandchildren, & great-great-grandchildren; along with a host of friends.   Honorary casket bearers will be Jacob Tucker, Josh Tucker Tony Pounds, and Michael Grow. Serving as casket bearers will be Todd Grow, Tim Grow, Brian Sweere, Gabriel Line, Nick Sweere and Jerod Conn.   Burial will be in Green Lawn Cemetery in Verndale, MN.

The public funeral service for Lorraine Taggart of Verndale, will be held at 2:00 p.m. on Friday, January 8, at Joyful Spirit United Methodist Church (currently in the First Congregational United Church of Christ building) in Wadena, with... View Obituary & Service Information

The family of Lorraine Taggart created this Life Tributes page to make it easy to share your memories.

The public funeral service for Lorraine Taggart of Verndale,...

Send flowers to the Taggart family.