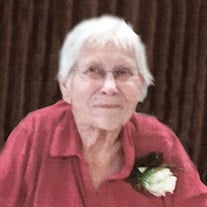 The funeral service for Lou Clare Johnson, age 100, of Eagle Bend will be held at 11:00a.m. on Monday, March 14, at the Faith Lutheran Church in Eagle Bend, MN, with Pastor Allen Mortenson presiding. Visitation will be held on Sunday, at the Schuller Family Funeral Homes & Cremation Services’ Domian-Anderson Chapel in Bertha, from 5:00 until 7:00 p.m, and will resume at the church on Monday from 9:30 a.m. until the time of the service. Lou Clare passed away on March 4, 2022 at the Todd County Care Center in Clarissa, MN  just two months shy of her 101st birthday. Lou Clare Marie Thorud was born to Norris and Mabel (Anderson) Thorud on May 2, 1921 in Eagle Bend, MN. She attended school in Eagle Bend and graduated in May 1938. Lou Clare was united in marriage with Clinton Stanley Johnson on June 22, 1938 in Wrightstown. They purchased land west of Eagle Bend in Otter Tail County where they farmed, cut cord wood, trapped, and built their home. In December 1946, they moved to their more current farmstead where they dairied until 1988. Together they built all of the buildings on their farm. Clinton and Lou Clare were fortunate to have a long, healthy retirement. Beginning in 1977, they spent their winters in Texas where they started collecting antiques. They opened an antique shop in their old dairy barn which they ran for about 15 years.  Lou Clare was active in Red Hats, garden club and WELCA.  She was very creative.  Lou Clare was a prize winning quilter and loved gardening and growing flowers.  She was a very hard worker and had a good, long life. Preceding Lou Clare in death were her husband of 75 years, Clinton (2013);  parents, Norris and Mabel; infant children Sharon and Clinton; daughter Carol Ann Kramer; son Kenneth; grandchildren Jamie Johnson, Nicholas Benning and Darcy Fink; sister Dorothy (John) Farrell; and brothers Norris Jr. (Ana), Vernon (Patsy) and Lowell (Wanda). Treasured memories of Lou Clare will remain with her children, Larry (Sharon) of Browerville; Betty (Floyd) Brekke and Bonnie (Gary) Benning both of Eagle Bend, and Beverly (Patrick) Dolezal of Staples; son-in-law Harold Kramer of Vining; daughter-in-law Linda Johnson of Apache Junction, AZ and sister-in-law Marcy Johnson of Eagle Bend; 18 grandchildren, 39 great-grandchildren, and 11 great-great-grandchildren. Burial will be in Hope Cemetery, Eagle Bend, MN.

The funeral service for Lou Clare Johnson, age 100, of Eagle Bend will be held at 11:00a.m. on Monday, March 14, at the Faith Lutheran Church in Eagle Bend, MN, with Pastor Allen Mortenson presiding. Visitation will be held on Sunday, at the... View Obituary & Service Information

The family of Lou Clare Johnson created this Life Tributes page to make it easy to share your memories.

The funeral service for Lou Clare Johnson, age 100, of Eagle...