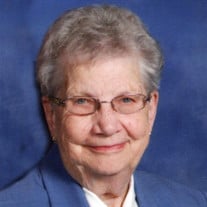 The funeral service for Lucille Willie Hagedorn, a resident of  St. Williams Living Center in Parkers Prairie will be held at 11:00 a.m. on Thursday, February 8, at the Faith Lutheran Church in Eagle Bend, with Pastor Allen Mortenson presiding.  Visitation will be at the church on Thursday from 9:30 a.m. until the time of service.   Lucille, age 89, passed away with family at her side on Sunday, February 4, 2018, at the St. Williams Living Center, Parkers Prairie, MN.   Lucille was born to Leon Orlando and Gladys (Nelson) Hammond on October 28, 1928 in Eagle Bend, MN. She graduated from Eagle Bend High School with the Class of 1947.   Lucille and Ruben Calvin Willie were united in marriage on August 29, 1947. They made their home in Cloquet where she cared for their family and worked at the Match Mill. They moved to Eagle Bend in 1972. Ruben passed away on December 4, 1976. After Ruben's passing she cared for their four children and worked at the school library and in the Ag Dept. It wasn’t until December 20, 1990 that Lucille married Marlyn Hagedorn, her companion until her last day.  Over the years, Lucille enjoyed bowling, dancing, crocheting, playing cards, and a day at the casino! Outdoors she loved to fish and trap animals.  Lucille was a member of the VFW Auxiliary and Faith Lutheran’s Ladies Aid.   Lucille was preceded in death by her parents Leon and Gladys; her first husband Ruben Willie; brothers LaRoy, Gerald, Donald and Leon Hammond; and sister Marlene Klimek.   She is survived by her loving husband Marlyn of Eagle Bend; sons Bruce (Barb) Willie of Upsala, and Brian (Kathy) Willie of Detroit Lakes; daughters Barb Hess of Long Prairie, and Brenda (Tom) Murch of Henning; 10 grandchildren and 19 great-grandchildren; siblings Darald (Carol) Hammond of Eagle Bend, Leilo Lorenz of Chanhassen and Dorothy Nordstrom of Parkers Prairie; along with Marlyn’s family: Marla (Kevin) Palaw of Park Rapids, Mark (Janice) Hagedorn of Washington DC, Mahlon (Lena) Hagedorn of KS, Marsha (Chris) Young of Atlanta, GA; 12 grandchildren and 8 great-grandchildren. Honorary pallbearer will be granddaughters Alesha (Murch) Spindler, Kayla Hess, Kelsey (Hess) Zeis.   Active pallbearers will be grandsons Chris Willie, Chad Willie, Aaron Willie, Jason Willie, Dylan Willie, Austin Murch, Anthony Murch.   Burial will be in the Esther Cemetery, near Parkers Prairie, MN.   The family suggests memorials be directed to the American Cancer Society or a local hospice organization.

The funeral service for Lucille Willie Hagedorn, a resident of  St. Williams Living Center in Parkers Prairie will be held at 11:00 a.m. on Thursday, February 8, at the Faith Lutheran Church in Eagle Bend, with Pastor Allen Mortenson presiding.... View Obituary & Service Information

The family of Lucille Willie Hagedorn created this Life Tributes page to make it easy to share your memories.

The funeral service for Lucille Willie Hagedorn, a resident of...

Send flowers to the Hagedorn family.