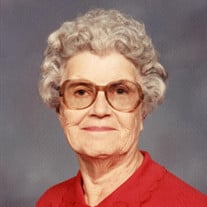 The public Mass of the Christian burial for Lucille Zeta of Wadena, will be celebrated at 11:00 a.m. on Friday, March 5, at St. Ann’s Catholic Church in Wadena, with Father Aaron Kuhn as celebrant. A public visitation will be held at the church on Friday from 9:30 a.m. with a Rosary at 9:45. Mass will begin at 11:00a.m. Lucille, age 100, passed away on February 17, 2021, at Serenity Living Solutions in Sebeka, MN, under the tender care of Knute Nelson Hospice. Lucille was born to Joseph and Clara (Sha) Morris on October 5, 1920, on their farm south of Staples, MN. She attended country school and Sacred Heart Parochial School before receiving her diploma from Staples High School. Lucille was united in marriage with Ray J. Zeta on February 14, 1941, at the Sacred Heart Catholic Church in Staples. They lived for a short time in Fargo, ND, until Ray entered the US Army in 1942. Lucille moved back to Staples, then in 1944 to Princeton. Ray returned from the Army in August 1945, and they lived for a time in Little Falls and Minneapolis. By September 1947, they made their home in Wadena where they raised their family of five children and lived out their days. Lucille was a homemaker most of her life. She also enjoyed working as a home health aid for Wadena County. In spare time, she found joy in going to the lake, gardening, and yardwork. She often wondered why more people didn’t plant trees for shade and as shelter belts. Most of all, Lucille loved having her children and their families around. Preceding Lucille in death were her husband Ray on December 11, 1983; two brothers and three sisters; and grandson Mike Fenton. Surviving Lucille are her children, Jack (Heidi) Zeta of Minneapolis, Diane (Roger) Vien of New Brighton, Duane (Ellen) Zeta of Northfield, David (Virginia) Zeta of Wadena and Jean (Walter) Paler of Fergus Falls; along with grandchildren; Valerie, Susan, Heather and Nathan; step-grandchildren, Rhonda, Tim and Richard; and nine step-great-grandchildren. Serving as pallbearers will be Valerie Oak-Zeta, Walter Paler, Tony Kramer, Tom Zeller, Duane Zeta, and Jack Zeta. Burial will be held at a later date in Fort Snelling Cemetery, Minneapolis, MN.

The public Mass of the Christian burial for Lucille Zeta of Wadena, will be celebrated at 11:00 a.m. on Friday, March 5, at St. Ann&#8217;s Catholic Church in Wadena, with Father Aaron Kuhn as celebrant. A public visitation will be held... View Obituary & Service Information

The family of Lucille Zeta created this Life Tributes page to make it easy to share your memories.

The public Mass of the Christian burial for Lucille Zeta of Wadena,...

Send flowers to the Zeta family.