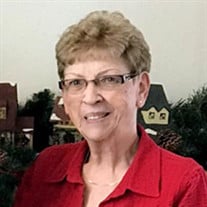 The funeral service for Mabel “Meg” Gulsvig of Wadena, will be held at 11:00 a.m. on Wednesday, December 22, at St. John Lutheran Church in Wadena, with Pastor Stephen Meltzer presiding.   Visitation will be held on Tuesday, from 5:00 until 7:00 p.m. at the Johnson-Schuller Chapel in Wadena and will resume at the church on Wednesday from 9:30 a.m. until the time of the service. Meg, age 80, passed away on December 17, 2021, at her daughter’s home in rural Sebeka, MN, with loving care provided by her family.   Mabel “Meg” was born to Carl and Gladys (Lang) Beckman on September 1, 1941, in Wolford, ND. Her family moved to Minnesota in 1946 and she attended country school near Eagle Bend.   Meg was united in marriage with Richard Rhodes on May 9, 1959, at her parent’s farm. They made their home in Eagle Bend until Richard’s passing on March 19, 1961. After some time, she met and married Robert Ziegenhagen, and they later parted ways. On June 4, 1994, Meg married Herbert “Herb” Gulsvig at St. John Lutheran Church in Wadena. Herb and Meg were enthusiastic travelers who were also happy to join their friends for hours of dancing!   The greatest joy in Meg’s life were her children, grandchildren and great-grandchildren. She was very proud of each of them and treasured spending time with them. Meg looked forward to having coffee with her girlfriends on Friday mornings, and after church and dinner on Sunday she enjoyed playing cards with friends, too. Meg was a member of St. John Lutheran Church, the Quilting Club, Guild, and was always interested in preparing for the church rummage sale. She was a lifetime member of the Wadena VFW Auxiliary.   Preceding Meg in death were her husbands, Richard and Herb; parents, Carl and Gladys; and siblings Herman, Melvin, Hester and Gordon Beckman and Margaret Krause, Helen Hammond.   Left with loving memories are her children, Kent (Ruth) Ziegenhagen of Bebee, AR, Richard (Leanne Kozitza) Ziegenhagen of Pillager, Connie (Jerry) Peyton of Sebeka, Robin (Bruce Nelson) Oestreich of Rochester, Steven (Cathy) Ziegenhagen of Waconia and David (Marie) Ziegenhagen of Cibolo, TX; 13 grandchildren and 11 great-grandchildren; siblings, Henry Beckman, Roy Beckman, Calvin Beckman all of Butte, MT, Darrell (Jean) Beckman of Andover and Esther Baron of Elk River.

The funeral service for Mabel &#8220;Meg&#8221; Gulsvig of Wadena, will be held at 11:00 a.m. on Wednesday, December 22, at St. John Lutheran Church in Wadena, with Pastor Stephen Meltzer presiding.   Visitation will be held on Tuesday, from... View Obituary & Service Information

The family of Mabel "Meg" Gulsvig created this Life Tributes page to make it easy to share your memories.

The funeral service for Mabel “Meg” Gulsvig of Wadena, will be...

Send flowers to the Gulsvig family.