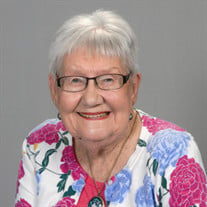 Marcella (Blashack) Stone died on Saturday, June 15, 2019 at the age of 93. Mass of Christian Burial will be celebrated at 11:00 a.m., on Wednesday, June 19, 2019, at St. Edward Catholic Church in Henning with Fr. LeRoy Schik as celebrant. Interment will take place at St. William’s Catholic Cemetery in Parkers Prairie. A visitation will be 5-7 p.m., Tuesday at St Edward Catholic Church in Henning and will continue one hour prior to the service. Marcie was born on June 15, 1926, at her home in Eastern Township, Ottertail County to Louis and Mary (Hastreiter) Blashack. She graduated from 8th grade country school, then Parkers Prairie High School in 1944, St. Cloud Hospital School of Nursing as an RN in 1947, and finally Bemidji State College in Community Health in 1975. She began her nursing career in Brownsville, Texas as a private duty nurse while she received training as a military nurse. The war ended at that time and Marcie moved back to Minnesota to work at Lady of Mercy Hospital in Alexandria. On August 9, 1949, Marcella married William Stone at St. Joseph Catholic Church, Bertha. They were married for sixty-five years. They were early members of St. William’s Catholic Church, Parkers Prairie, where she was a member of the Christian Mothers’ Society and church choir. They farmed in Elmo Township from 1949-1984, then moved to a home close to the farm until they moved to East Battle Lake in 1991. In 2009 they moved to Willow Creek in Henning, where she died peacefully within the care of her family, Willow Creek staff, and Knute Nelson Hospice. Her nursing career included school tuberculosis testing in schools for the State of Minnesota, nursing at Henning Nursing Home, private duty nursing, school nursing at Henning, Deer Creek and Parkers Prairie Schools from 1966-1985, and finally home health care. She was active in several professional nursing organizations. Over the years she belonged to Homemakers Club, was a 4-H leader; participated on a softball team and bowling league; she also enjoyed fishing, golfing, square dancing, playing cards and traveling the world with Bill. To be honest, Marcie would play cards and games at anytime, anywhere! Her family was the joy of her life and she enjoyed family gatherings and calls and visits from them. Marcie was preceded in death by her parents; four siblings, and her husband Bill in 2015. She is survived by her children; Bruce (Arleen) Stone of Perham, Ethel (Tom) Muchlinski of Plymouth, Sheila (James) Seelhammer of Deer Creek, Pat (Jodi) Stone of Shasta Lake, California and Mark (Camille) Stone of Wadena; 15 grandchildren and 34 great-grandchildren Pallbearers are Marcie’s granddaughters; Shannon Tempel, Rachel Carriveau, Kristina Taylor, Sara Stone, Katherine Mitchell, Greta Garcia, Laura Johnson, Kara Kules and Kayla Olson. Honorary Pallbearers are Marcie’s grandsons; Ryan Stone, Jacob Seelhammer, Joshua Seelhammer, Ross Seelhammer, Casey Seelhammer, and Matthew Stone Arrangements provided by Lind Family Funeral & Cremation Services, Alexandria, Miltona and Parkers Prairie, MN. www.lindfamilyfh.com.

Marcella (Blashack) Stone died on Saturday, June 15, 2019 at the age of 93. Mass of Christian Burial will be celebrated at 11:00 a.m., on Wednesday, June 19, 2019, at St. Edward Catholic Church in Henning with Fr. LeRoy Schik as celebrant.... View Obituary & Service Information

The family of Marcella "Marcie" Stone created this Life Tributes page to make it easy to share your memories.

Send flowers to the Stone family.