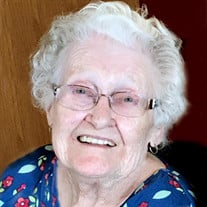 The Mass of Christian Burial for Margaret Kern, of rural Bluegrass, will be celebrated at 11:00 a.m. on Monday, January 7, at St. Hubert’s Catholic Church in Bluegrass with Father Lauren Germann as celebrant. Visitation will be held on Sunday at the Johnson-Schuller Chapel in Wadena, from 3:00 until 6:00 p.m., with a Rosary at 5:00 p.m. Visitation will resume at the church on Monday from 9:30 a.m. until the time of the Mass. With family at her side, Margaret, age 98, passed away on Wednesday, January 2, 2019, at her home near Bluegrass, MN. Margaret was born to Guy and Gertrude (Maher) Dougherty on July 26, 1920, in Deuel County, SD. Margaret graduated from Madison High School, Madison MN, in 1936, received her Teacher’s Certification and taught various country schools in southern Minnesota and Wadena County. She received her Bachelors of Science Degree from Bemidji State and taught school at Sebeka until her retirement in 1983. On July 16, 1946, Margaret and Clement “Clem” Kern were united in marriage at St. Hubert’s Catholic Church in Bluegrass, where she was a member for the rest of her life. Her days were filled with the many tasks of raising seven children on their farm east of Bluegrass. Margaret was an avid reader and enjoyed reciting poetry. She loved the outdoors, flowers and birds. In retirement, quilting became her passion, having made hundreds of quilts for family, neighbors and friends. Margaret was an inspiration to many people with her positive outlook on life and her faith. Margaret was preceded in death by her husband, parents and siblings, Babe, Kay, Annarose and Mike. Left to hold Margaret in their memories are her sons Gary, Gene (Jan), and Jack (Ronda), all of Sebeka; daughters, Barbara (John) Runck of Olathe, KS, Trudy (Murlyn) Kreklau of Sebeka, Laurie (Jim) Wolf of Monument, CO and Mitzi (Mike) Blanchard of Muskego, WI; 21 grandchildren and 31 great-grandchildren. Honorary pallbearers will be Margaret’s granddaughters and active pallbearers will be her grandsons. Burial will be in St. Hubert’s Catholic Cemetery, east of Bluegrass, MN.

The Mass of Christian Burial for Margaret Kern, of rural Bluegrass, will be celebrated at 11:00 a.m. on Monday, January 7, at St. Hubert&#8217;s Catholic Church in Bluegrass with Father Lauren Germann as celebrant. Visitation will be held on... View Obituary & Service Information

The family of Margaret Kern created this Life Tributes page to make it easy to share your memories.

The Mass of Christian Burial for Margaret Kern, of rural Bluegrass,...