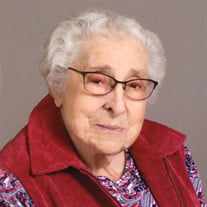 The Mass of Christian burial for Margaret Kraemer of Wadena, will be celebrated at 11:00 a.m. on Thursday, May 16, at St. Ann’s Catholic Church in Wadena, with Father Aaron Kuhn and Father Matthew Kraemer as concelebrants. Visitation will be held on Wednesday, from 4:00 until 7:00 p.m. at the Johnson-Schuller Chapel in Wadena, with a Rosary at 5:00 and Prayers at 6:00 p.m. Visitation will resume at the church on Thursday from 9:30 a.m. until the time of Mass. Surrounded by her family, Margaret, age 95, passed away on Sunday, May 12, 2019, at the Tri-County Health Care in Wadena, MN. Margaret Ann was born to Aloisius and Margaret (Hammes) Walz on February 18, 1924, in Bluffton, MN. Margaret was united in marriage with Francis “Chops” Kraemer on April 25, 1949, at the St. Ann’s Catholic Church in Wadena. They made their home west of Wadena, next to Black’s Grove Park. She was active as a 4-H Leader, in Christian Mothers, with Avon sales, and as a Pink Lady volunteer at the hospital for over 25 years. Margaret was an avid gardener, and was talented at hand embroidery and quilt making. She also enjoyed playing cards and dominos. Margaret and Chops shared many happy hours as square dancing partners. Preceding Margaret in death were her husband, Francis “Chops” on April 21, 2008; sons, Thomas in 1995 and Michael in 2018; parents, Aloisius and Margaret; brothers Raymond, Bernard, Richard, Vincent, Alois and Roman; and sisters in-law, Bonnie (Richard), Peggy (Vincent), Rosie (Alois) and LaDean (Philip).  She is survived by her children, Carol (Daniel) Osborn of Wadena; Mark of Minneapolis, Ken (Karen) of Minneapolis, Dave (Patricia) of Wadena, and Phil (Laurie) of Grand Forks, ND; daughter-in-law, Linda Kraemer of Brooklyn Park; 23 grandchildren and 31 great-grandchildren; along with brother, Philip of Fullerton, CA; along with sisters-in-law, Joanne Walz of Sebeka and Kathy Walz of Perham. Active pallbearers will be Tina Derby, Theresa Stenglein, Kelly Kraemer, Monica Shaw, Molly Kraemer and Sarah Komprood. Burial will be next to her husband in Calvary Cemetery, Wadena, MN. Memorials may be directed to St. Ann’s Catholic Church, Wadena, MN.

The Mass of Christian burial for Margaret Kraemer of Wadena, will be celebrated at 11:00 a.m. on Thursday, May 16, at St. Ann&#8217;s Catholic Church in Wadena, with Father Aaron Kuhn and Father Matthew Kraemer as concelebrants. Visitation... View Obituary & Service Information

The family of Margaret Kraemer created this Life Tributes page to make it easy to share your memories.

The Mass of Christian burial for Margaret Kraemer of Wadena,...

Send flowers to the Kraemer family.