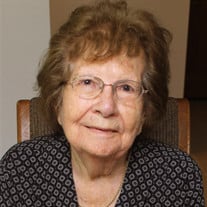 The Mass of Christian Burial for Marian Brockpahler, of Sebeka will be celebrated at 11:00 a.m. on Tuesday, July 3, at the St. Ann’s Catholic Church in Wadena, with Father Aaron Kuhn as celebrant. Visitation with the family will be held at the church on Tuesday from 9:30 a.m. until the time of the Mass. Marian Martha Brockpahler, age 90, passed away on Wednesday, June 27, 2018, at the Serenity Living Solutions in Sebeka, MN, under the compassionate care of Knute Nelson Hospice. Marian was born to Mathias “Math” and Frances (Vorderbruggen) Heltemes on July 6, 1927, in Bluffton, MN, and attended District #23 Country School. Marian was united in marriage with Walter Brockpahler on May 23, 1950, at St. Hubert’s Catholic Church in Blue Grass, MN. They made their home by Sebeka. Marian’s days were filled with the tasks of a homemaker, farm wife and mother of five. She was always busy baking and gardening! Marian enjoyed reading, going to garage sales, and playing cards. She especially enjoyed spending time with her family! In 1982, Marian and Walter made Wadena their home. Walter passed away in 2005, and Marian stayed in Wadena until moving to Sebeka in 2010. Preceding Marian in death were her husband; her parents; brothers Andrew, Louie, Jerome, Joseph, Leonard, Arthur, Mathias, and Walter; and sisters Mabel Heltemes and Irene Kopischke. Marian is survived by her sons: David (Carla) of Waconia, Brad (Roxanne) of Nimrod, and Gerald of Park Rapids; daughters: Connie (Dave) Cardini of Sebeka and Linda (Tom) Stursa of Park Rapids; brother Ervin (Joanne) Heltemes of Cudahy, WI; brother-in-law John Kopischke of Wadena; sister-in-law Mary Heltemes of West Bend, WI; along with her beloved nine grandchildren and fourteen great-grandchildren. Honorary pallbearers will be Marian’s great-grandchildren: Wyatt, Blake and Levi Olson, Madelyn and Dylan Mackenthun, Brianna, Allison and Courtney Brockpaher, Emily and Kyle Grimsbo, Leah and Mitchell Weaver, and Natalie and Emma Cardini. Pallbearers will be grandchildren Bethany Mackenthun, Nathan Brockpahler, Sarah Olson, Mary Weaver, Ryan Cardini, Coleman Rydie, Tanya Grimsbo, Brandon Stursa and Kayla Stursa. Burial will be in Calvary Cemetery, Wadena, MN.

The Mass of Christian Burial for Marian Brockpahler, of Sebeka will be celebrated at 11:00 a.m. on Tuesday, July 3, at the St. Ann&#8217;s Catholic Church in Wadena, with Father Aaron Kuhn as celebrant. Visitation with the family will be held... View Obituary & Service Information

The family of Marian Brockpahler created this Life Tributes page to make it easy to share your memories.

The Mass of Christian Burial for Marian Brockpahler, of Sebeka...

Send flowers to the Brockpahler family.