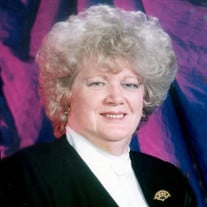 The Mass of the Christian Burial for Marian Schmith of Wadena will be celebrated at 11:00 a.m. on Friday, March 29, 2019 at St. Ann's Catholic Church. A visitation will be held at the Johnson-Schuller Chapel from 5:00 - 7:00 p.m. on Thursday. Visitation will continue at the church on Friday from 9:30 a.m. until the time of mass. Marian passed away at the age of 92, on March 23, 2019, at Fair Oaks Lodge in Wadena, under the tender care of Knute Nelson Hospice. Marian was born to Martin and Lillian (Kovar) Schloeder on July 12, 1926, in Wadena, MN. She graduated from Wadena High School in 1944. On May 17, 1945, she was united in marriage with Sylvester “Bud” Schmith at St. Ann’s Catholic Church in Wadena. They lived on Bud’s father’s farm, but moved to her parents when Bud was drafted into the Army. On his return they moved into their own home. She was active in Girl Scouts when her daughters were in the troop. She was also a Pink Lady at the hospital. As a member of the VFW Auxiliary, she served as President, 6th District President, and Department of MN Patriotic Instructor. She worked at J.C. Penney’s in the catalog department and as a front desk clerk at the Four Seasons Motel. She and Bud spent 13 winters in Tucson, AZ, at a senior mobile home park. She enjoyed collecting dolls and decorating for the holidays. Marian is preceded in death by her husband, Bud; her parents; brother, Don; children, Tim and Pat and granddaughters, Kelly and Kristine. Left to cherish Marian’s memory are her children, Bill (Rose) of Sebeka, Sue Blaseck of Rancho Mirage, CA, Nancy (Charlie) Lee of Paris, IL, Becky (Steve) Shunk of Virginia Beach, VA, Shelly (Johnny) Lang of Las Cruces, NM and son-in-law, Mike of Spicer; along with 18 grandchildren, 26 great-grandchildren, and 1 great-great grandchild. Pallbearers will be Lisa Schoneman, Lisa Thomson, Dale Schmith, Travis Schmith, Taylor Johnson, and Nicolas Lang. Burial will be at Wadena Cemetery in Wadena, MN.

The Mass of the Christian Burial for Marian Schmith of Wadena will be celebrated at 11:00 a.m. on Friday, March 29, 2019 at St. Ann's Catholic Church. A visitation will be held at the Johnson-Schuller Chapel from 5:00 - 7:00 p.m. on Thursday.... View Obituary & Service Information

The family of Marian Schmith created this Life Tributes page to make it easy to share your memories.

The Mass of the Christian Burial for Marian Schmith of Wadena...

Send flowers to the Schmith family.