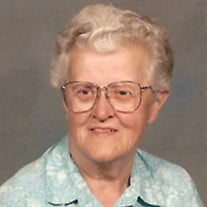 The funeral service for Marilyn Cain, of Wadena, will be held at 11:00 a.m. on Monday, February 10, at Joyful Spirit United Methodist Church/First Congregational United Church of Christ, in Wadena, with Pastor Amy VanValkenburg presiding. Visitation will be held at the church on Monday from 9:30 a.m. until the time of the service. Marilyn, age 88, passed away with family by her side on Tuesday, February 4, 2020, at the Lakewood Health System Care Center, Staples, MN. Marilyn was born on May 27, 1931 in Hollandale, MN to Larry and Helen Goldsberry. She graduated from Ellendale High School and was married to Garrett Cain on June 7, 1950. They moved to Wadena in 1954 and bought a farm south of Wadena. In addition to farming, they were both school bus drivers for Wadena schools. Marilyn was a wonderful caregiver to her children, grandchildren and great grandchildren. Her dry sense of humor and fun was ever present. She loved playing cards with everyone, especially Skip-Bo. While driving bus, she especially liked driving for the girls' basketball team. She was truly their "number one fan". Marilyn was a long time member of the United Methodist Church and especially enjoyed being a part of the quilt group called "The Cut Ups". Marilyn was preceded in death by her husband Garrett on April 14, 1988; and siblings John Goldsberry and Carol Goldsberry. Marilyn is survived by her daughter Pat (Stuart) Anderson of Ramsey and son Bruce (Darlene) Cain of Sebeka; grandchildren Jason (Jenn) Anderson, Robert (Jessie) Cain, Sarah (Mike) Lawler, Tony, Molly (Will) Klos, Kris (Kevin) Toohey; great grandchildren Jake, Gabi, Gavin, Ben, Lucas, Teagan. Honorary pallbearers will be all of Marilyn’s grandchildren. Serving as pallbearers will be Jason Anderson, Tony Cain, Mike Lawler, Kevin Toohey, Jake Toohey and Will Klos. Burial will be at a later date in the Wadena Cemetery, Wadena, MN.

The family of Marilyn Cain created this Life Tributes page to make it easy to share your memories.

The funeral service for Marilyn Cain, of Wadena, will be held...

Send flowers to the Cain family.