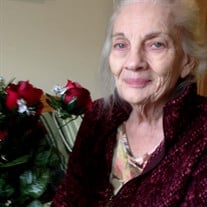 Funeral services for Marion Lundquist of Wannaska, MN, and formerly of Wadena, will be held on Friday, January 11th at 10:00 a.m. at Riverside Lutheran Church in Wannaska. A visitation will be one hour prior to the service at the church; and the service will be followed by a small luncheon. In lieu of flowers or gifts, Marion’s family asks that you donate your time and/or money to helping our elderly population, by visiting nursing homes, and by helping those who care for patients living with dementia and Alzheimer’s Disease. Marion May Rosabell Grefthen Lundquist, 85, was born July 22, 1933 in Malung Township to Benford and Adeline Grefthen. She passed away peacefully on January 5, 2019 at Warroad Senior Living Center after living with dementia for almost ten years (and residing in Warroad since 2014). She was a beloved wife, mother, grandmother, sister, cousin, aunt, teacher, and friend. Marion graduated from Roseau High School in 1951 then continued her education in Thief River Falls, where she completed the Teacher’s Training Program. She went on to teach in a one-room schoolhouse in Strathcona; while there, she met James Lundquist whom she married on October 16, 1954 at Riverside Lutheran Church in Wannaska. Together, they had four children: James Neil, Nicholas Jerome, Lauren Keith, and Leslie Ann. They lived in Mississippi and Alabama while James was in the Air Force and Chrysler Missile, respectively, and finally settled in Wadena, Minnesota, residing there until 1996. Upon retirement, Marion and James moved to her family farm outside of Wannaska, adding on to the original farmhouse, planting a garden, grooming trails through the woods, and enjoying the nature surrounding their retirement home. Marion was always a believer in education. Early in their marriage, she and James invested in Encyclopedias that Marion wanted to keep so that her children would be able to use them, too. In a letter to James in 1955, she wrote that she was so glad to have the books, “so that our children can use them and we may go back to school again. Sometime maybe.” In fact, Marion did return to school, earning a Bachelor of Science in History Teaching and minor in Social Studies from Bemidji State University in 1977. She was active as a substitute teacher in Wadena; worked with the talented and gifted program in the Elementary School; and from 1979-1990 held positions of Secretary, Vice President, and President of the Wadena County Historical Society. She also was a school bus driver then worked alongside James at the Wadena TV Center until retirement. After moving to Wannaska, she remained active by teaching Sunday School. She will be deeply missed by her husband, James; her children Nicholas (Maria) Lundquist, Lauren (Wendy), Lundquist, and Leslie (Marty) Werden; her grandchildren Nicole, Nicholas, Brody, Brenan, Austen, Walter, Owen, and Eli; her brother Jerome (Geanen) Grefthen; and many cousins, nieces, and nephews. She is preceded in death by her son, James Neil (1967); her father, Benford Grefthen (1967); and her mother, Adeline (Austin) Grefthen Miramontes (1987). Interment will be at the Mickinock Cemetery in Wannaska. Arrangements are with the Helgeson Funeral Homes and Cremation Services, Roseau, Warroad and Baudette, MN. Tributes may be left at https://www.helgesonfuneralhome.com

Funeral services for Marion Lundquist of Wannaska, MN, and formerly of Wadena, will be held on Friday, January 11th at 10:00 a.m. at Riverside Lutheran Church in Wannaska. A visitation will be one hour prior to the service at the church; and... View Obituary & Service Information

The family of Marion Lundquist created this Life Tributes page to make it easy to share your memories.

Funeral services for Marion Lundquist of Wannaska, MN, and formerly...

Send flowers to the Lundquist family.