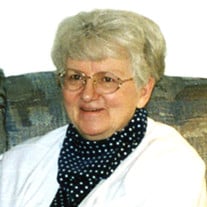 The funeral service for Marlys Nagle of Staples, and formerly of the Bemidji and Baudette area, will be held at 11:00 a.m. on Friday, October 12, at the First Baptist Church, 1555 Paul Bunyan Dr. NW, Bemidji, MN, with Pastor Stan Nelson presiding. Visitation will be held at the church one hour prior to the service. Martys Janet (McFarlane) Nagle was born on October 16, 1933, in Roseau County to the late George and Hazel McFarlane. She was united in marriage to Richard (Dick) Nagle on August 4,1956. The couple made their home in rural Graceton where they farmed for many years. In 1979 they sold the farm and moved to Bemidji where they purchased a home overlooking Lake Bemidji. Marlys’ careers outside of the home included working for Pillsbury Company in the Twin Cities, First National Bank of Baudette, Bemidji Vo-Tech and Bemidji High School. In 1991, Marlys started her own cleaning business. She enjoyed cleaning many beautiful homes in the Bemidji area. Marlys enjoyed painting wildlife scenes. She was an excellent cook. She loved gardening and was especially proud of her flowers. She also enjoyed watching the BSU Beavers play hockey. Marlys was a caring dedicated person and enjoyed spending time with family. With the onset of Alzheimer's, Marlys moved to Staples to be closer to family. She lived at the Lakewood Care Center the last few years until her death on October 7, 2018, at the age of 84. Marlys was preceded in death by her parents, husband Richard, son Galen Nagle, sister Nina Johnson, brothers-in-law Cliff Johnson and Art Redling, sister-in-law Carol McFarlane and son-in-law Donald Voeltz. Marlys is survived by her daughter, Patty (Jerry) Ward of Ottertail, MN; son Arly (Cheri) Nagle of Tempe, AZ; grandchildren Matthew (Lauren) Voeltz of Lancaster, MN, Michael Voeltz of Breezy Point, MN, and Rachel (Matthew) Peterson of Owatonna, MN; great grandchildren Melody, Peter, and Georgia Voeltz, Harper Voeftz, Connor and Bryce Peterson; brother Don McFarlane of Baudette, MN; sister Audrey Redling of New Brighton, MN and many nieces and nephews. She is also survived by her step-grandchildren and step-great-grandchildren and their families. Burial will be in the Calvary Cemetery, Bemidji, MN.

The funeral service for Marlys Nagle of Staples, and formerly of the Bemidji and Baudette area, will be held at 11:00 a.m. on Friday, October 12, at the First Baptist Church, 1555 Paul Bunyan Dr. NW, Bemidji, MN, with Pastor Stan Nelson presiding.... View Obituary & Service Information

The family of Marlys Nagle created this Life Tributes page to make it easy to share your memories.

The funeral service for Marlys Nagle of Staples, and formerly...

Send flowers to the Nagle family.