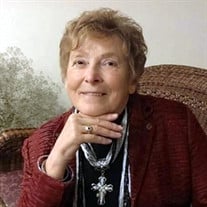 A private funeral service for Martha Moen with the Tichy and Moen families will be held Monday November 22nd at Domian-Anderson Chapel in Bertha at 11:00, private visitation will begin at 9:30. The public visitation with friends and family will be held on Sunday, November 21, from 5:00 until 8:00 p.m. at the Domian-Anderson Chapel in Bertha. Martha Irene Moen, 76, of Wadena, MN, passed away November 14th at Lakewood Health System in Staples. Martha was born In Wadena, July 2nd, 1945, to Edward and Annie Tichy. She was raised on the family farm east of Bertha along with her brothers and sisters. Life on the farm required hard work. From an early age Martha helped with the chores. By age six she learned to drive a tractor. She attended school in Bertha. Martha was 15 when her mother passed away and she became the caretaker of the family. Dad showed her how to bake bread, cook the meals and wash clothes. After spending her teenage years caring for her siblings, she left the farm and started a family of her own with husband Vilas. They moved to Minneapolis where Martha worked at a nursing home. It was during this time that she gave birth to two daughters, Roxanne Lee was born in March 1966 and Wanda Ann in May 1968. When news came that her father was sick with cancer they returned to the farm near Bertha. She told her dad not to worry “I will take care of the kids”. Family was always most important to Martha. Martha also enjoyed working outside the home. She worked at Carter Wringer in Staples, Morey’s in Motley, Tescom in Elk River and Walmart in Wadena. After several years on dialysis, she received a kidney transplant at the University of Minnesota in 2006. The procedure was successful but required constant monitoring. Martha would drive herself to the University for her appointments. Martha’s home was always beautifully decorated for each season, both inside and out. The yard and flower gardens were the envy of the neighborhood. Her hard work and talents were recognized by the Wadena Garden Club when she was awarded Yard of the Month. She loved having people visit to show off her green thumb and decorating skills. There was always a cup of hot coffee and a snack for anyone who stopped by. She loved the holidays and getting together with family, she was a great cook. Martha also oversaw decorating the Christmas House as a member of the England Prairie Pioneer Club. She was given the title of Queen one year by the members. Martha was preceded in death by her parents, her sister Florence and daughter Roxanne Curran (Tim). She is survived by sisters, Jeannette Johnson, Peggy Daniels (Bob), Shirley Rokes (David), Rosie Templin and Debbie Templin (Jim); her brothers, Harry Tichy (Sue), Ray Tichy (Karen) and Donnie Tichy (Regina); daughter, Wanda Nordby (Tim); grandsons, Brandon Klemek, Christopher Klemek (Keli), and Dylan Nordby; plus six great-grandchildren; and many nieces and nephews.

A private funeral service for Martha Moen with the Tichy and Moen families will be held Monday November 22nd at Domian-Anderson Chapel in Bertha at 11:00, private visitation will begin at 9:30. The public visitation with friends and family... View Obituary & Service Information

The family of Martha Moen created this Life Tributes page to make it easy to share your memories.

A private funeral service for Martha Moen with the Tichy and...

Send flowers to the Moen family.