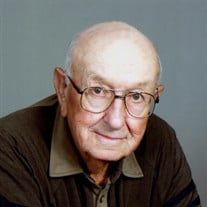 The memorial Mass for Martin Malone, of Wadena will be celebrated at 11:00 a.m. on Saturday, June 5, at St. Hubert’s Catholic Church in Bluegrass, with Father Aaron Kuhn as celebrant. Visitation will be held at the church on Saturday from 9:30 a.m. until the time of the Mass. Martin, age 94, passed away at his home in Wadena, on May 26, 2021, surrounded by his family and under the gentle care of Knute Nelson Hospice. Martin was one of twelve children born to Patrick and Magdalena (Tabery) Malone on November 8, 1926, in Leaf River Township, Wadena County, MN. Martin was united in marriage with Patricia Ilene Stuntebeck on April 26, 1950, at St. Ann’s Catholic Church in Wadena. Martin found a livelihood in working the land and dairy farming. Hours away from farming tasks included fishing, hunting, and trapping. He even had a guest appearance on YouTube about fishing. His quick wit might have some folks saying he was a bit of a smart aleck! Martin was a member of the NFO, St. Joseph Society and the Wadena Fishing League. Preceding Martin in death were his wife Patricia (4-29-2001); parents, Patrick and Magdalena; brothers, Richard, John, Eugene, Maurice and Joseph Malone; and sister, Lorraine Goeden. He is survived by children, Mary Schiller of Wadena, Diane (Neil) Colton of Dallas, OR, Bruce (Diane) Malone of Verndale, Gregory (Kim) of Wadena and Gerald Malone of Reimer; 12 grandchildren and 21 great-grandchildren; siblings Eileen Johnson, Thomas Malone, Paul Malone, Patricia Kicker and Joan Vokurka; along with a host of friends. Honorary urnbearers will be all of the grandchildren. Active urn bearers will be his grandsons Beau Sarazin, Tyler Malone, Ryan Colton and Jamie Malone. Interment will be in St. Hubert’s Catholic Cemetery, Bluegrass, MN.

The memorial Mass for Martin Malone, of Wadena will be celebrated at 11:00 a.m. on Saturday, June 5, at St. Hubert&#8217;s Catholic Church in Bluegrass, with Father Aaron Kuhn as celebrant. Visitation will be held at the church on Saturday... View Obituary & Service Information

The family of Martin Malone created this Life Tributes page to make it easy to share your memories.

The memorial Mass for Martin Malone, of Wadena will be celebrated...

Send flowers to the Malone family.